The cooperation "Romantic Franconia" is formed along the Castle Road by the Middle Franconian towns of Colmberg with its castle, Lichtenau with its fortress and Wolframs-Eschenbach. Wolframs-Eschenbach, which lies sheltered within a completely preserved city wall, is known as the city of the Minstrels and the Teutonic Order. The Teutonic Order wanted to build "beautiful towns" and "delicious houses", and so to this day magnificent half-timbered facades, the Teutonic Order castle and the tower of.... [More about Kooperation "Romantisches Franken"] 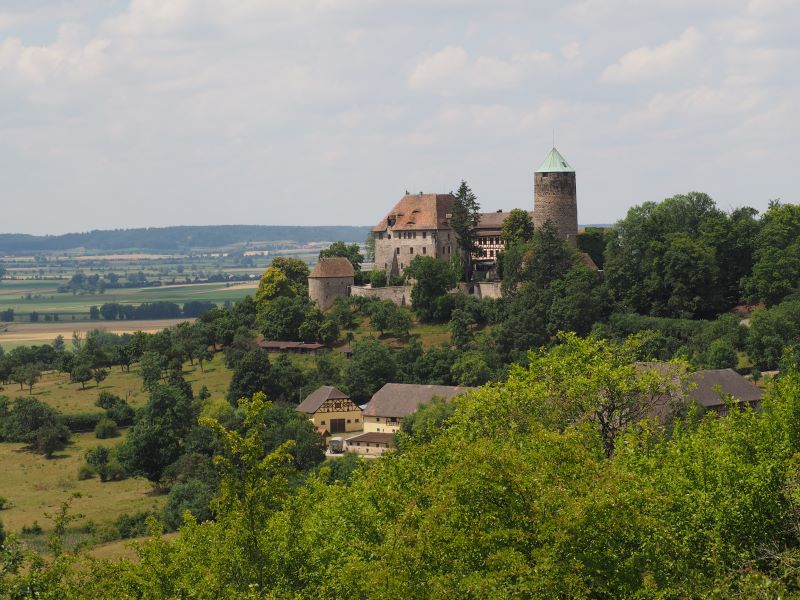 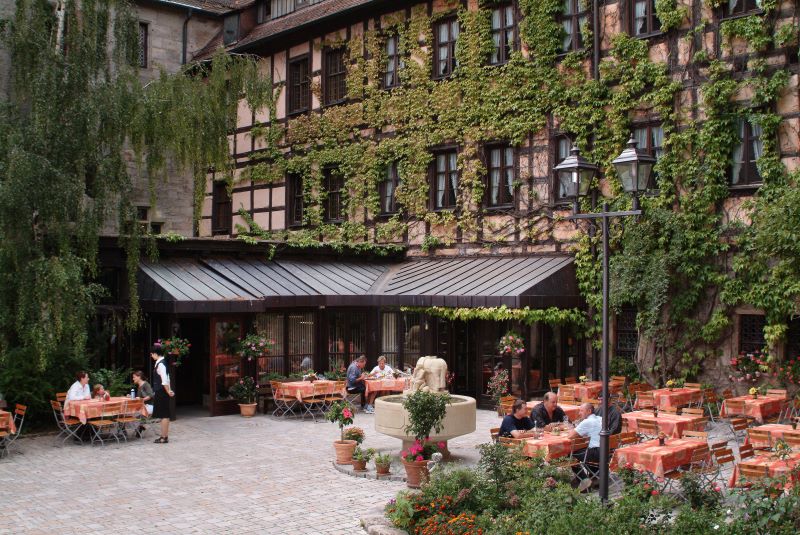 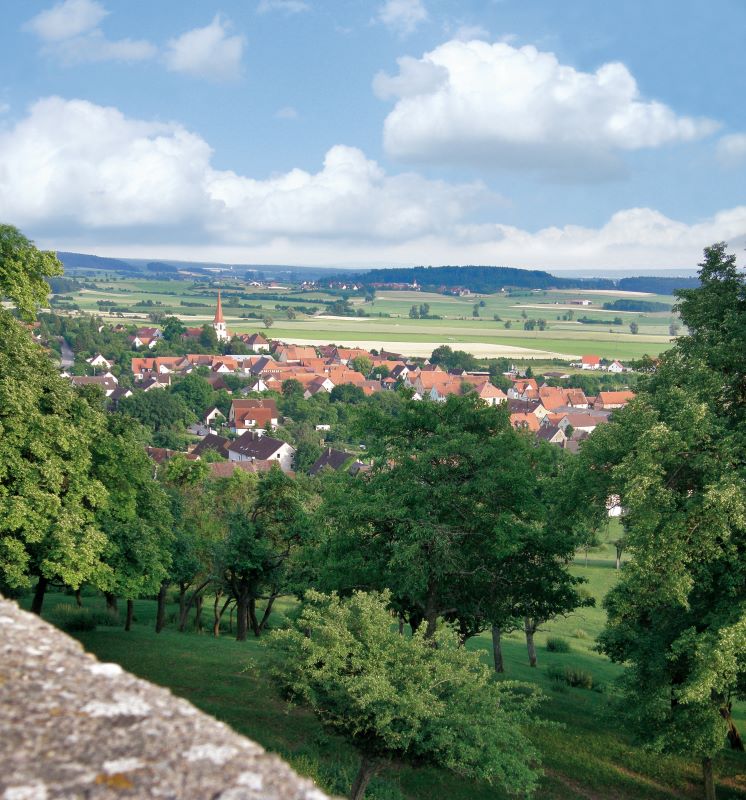 The castle - over more than 1000 years old - enthrones on a mountain peak with a delightful all-round view over the city with the same name and dominates the Upper Altmühltal.

Today visitors of the castle await a comfortable hotel with restaurant that enchants with a romantic atmosphere and medieval charme.

Colmberg Castle was never taken throughout its long, ever-changing history. According to tradition a fortress was built here in the Carolingian period around 770. In 1128 Colmberg became a fief of the counts of Hohenlohe. Between 1150 and 1240 the extension to a Staufer Imperial Castle took place, which is verfied through the masonry with embossed stones and pincer holes in the middle. Successors of the Staufers became the courts of Truhendingen in 1254. They were the first documentarily proven owners of the complex. In 1318 they sold the complex with the accompanying market town to the burgrave Friedrich IV of Nuremberg.

Colmberg castle became the seat of the Oberamt around 1320 and remained in the possession of the Hohenzollern for over 300 years. As from 1408 burgave Friedrich IV from Hohenzollern relocated his residence into the castle due to substantial cost savings until he became Margave of Brandenburg in 1415. From 1791 until 1806 the castle was under Prussian administration, under Napoleon castle and city became Bavarian. From 1806 until 1880 it was the seat of a revenue office, after that the castle passed to private property. From 1927 until 1964 the castle belonged to the last Imperial Consul of Japan Dr. Dr. h. c. E. A. Voretzsch. In 1964 the Colmberg family Unbehauen purchased the castle and turned it into a hotel. 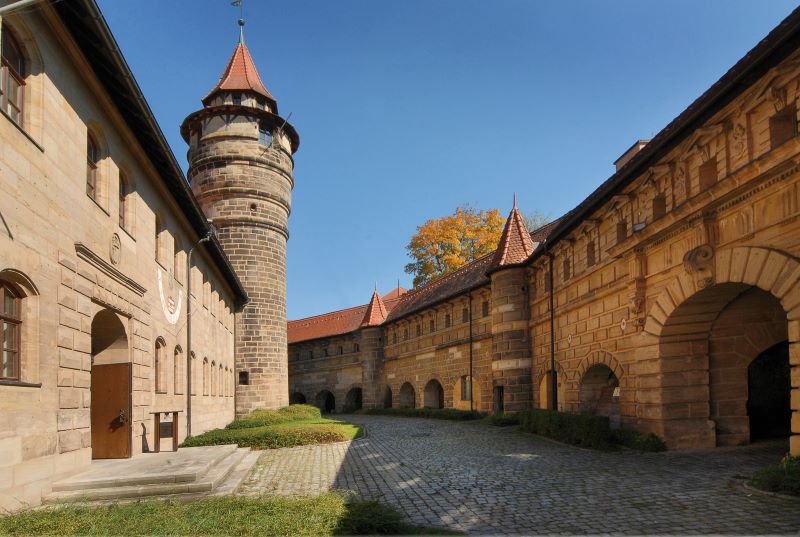 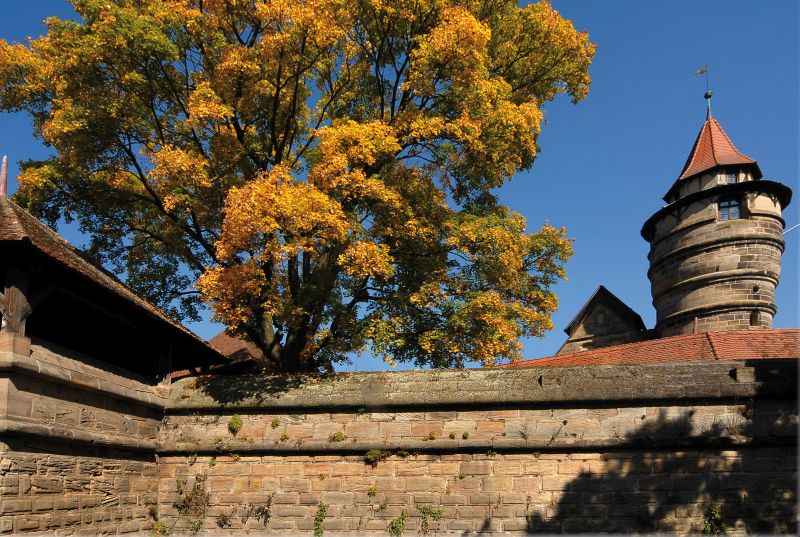 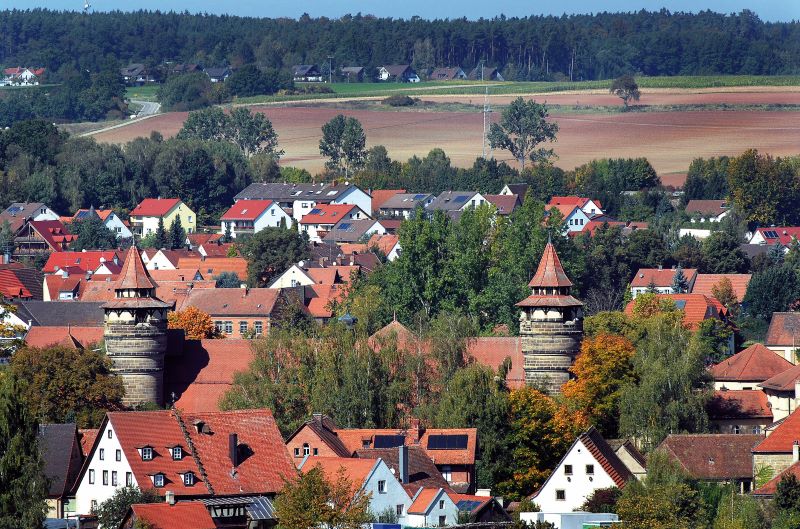 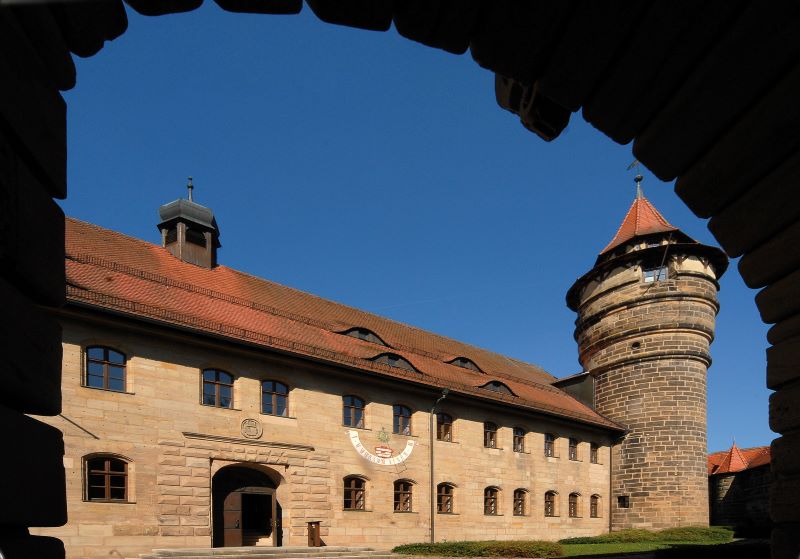 The formidable towers and walls of the former fortress clearly remind us that it was the model for the Nuremberg Castle, and witness to a not always peaceful past.

Inside the Veste Lichtenau the outpost of the state archive of Nuremberg is located which is open by appointment. The outdoor area is open to the public in daytime.

For four hundred years (1406 – 1806) the fortification and small market towns were owned by the free imperial city of Nuremberg and thus fatefully bound up with its history. During the feuds between the margraves of Ansbach and the Town Council of the free imperial city of Nuremberg the fortress and market were destroyed in 1449 and 1552. But the Nurembergers doggedly defended their property and spared no expense in rebuilding it. The well-preserved defense complex was built from 1558 to 1630 and was not substantially changed in the following years.The enclosing wall and moat that protected the small market towns in the past are still clearly recognizable. Projecting bastions were built at the corners of the polygon: the bear, the stag, the virgin battery, the dragon battery and the bell battery.

In 1631 troups of the general Tilly took the fortress,

in 1688 during the Third Reunion War it could be successfully defended against troups of King Ludwig XIV from France. 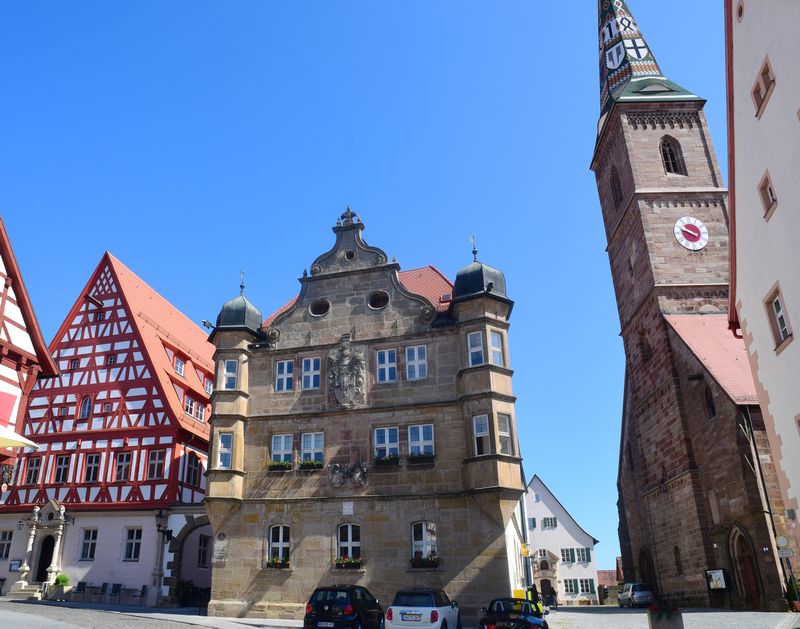 Wolframs-Eschenbach - Palace of the Teutonic Order of Knights.

The palace at the marketplace in the heart of the city ranks among the masterpieces of the Renaissance in Franconia and shapes the image of Wolframs-Eschenbach with its neat timbered facades. Today, the town hall and the tourist information are located here.

In 1623, the Teutonic Order Castle was built in the style of the late Renaissance under German Master Archduke Karl. Like no other facade, the front side of the main wing demonstrates the stately splendour and the self-conception of the Teutonic Order as a sovereign of the city and state. It was not a castle in the classical sense, but rather an urban aristocratic building, which was the accommodation for the county commander, dignitaries and guests of the Order and also housed the offices of the Teutonic Order on the ground floor. The rear part of the building served as a warehouse for the tithe, i.e. the tax payments collected in kind.