Goethe, somewhat reserved in his praise, called the town 'a little bit of perfection', Mark Twain, the pragmatic Mississippi pilot, wrote of 'extreme possibilities of beauty'. Heidelberg, which today has around 160,000 inhabitants, was a residence of German Electors and for centuries a focal point of German history. Bound up with it are names of royal dynasties such as Wittelsbach, Stuart or Medici, theologians like Martin Luther or politicians such as Friedrich Ebert (1871-1925), first president.... [More about Heidelberg] 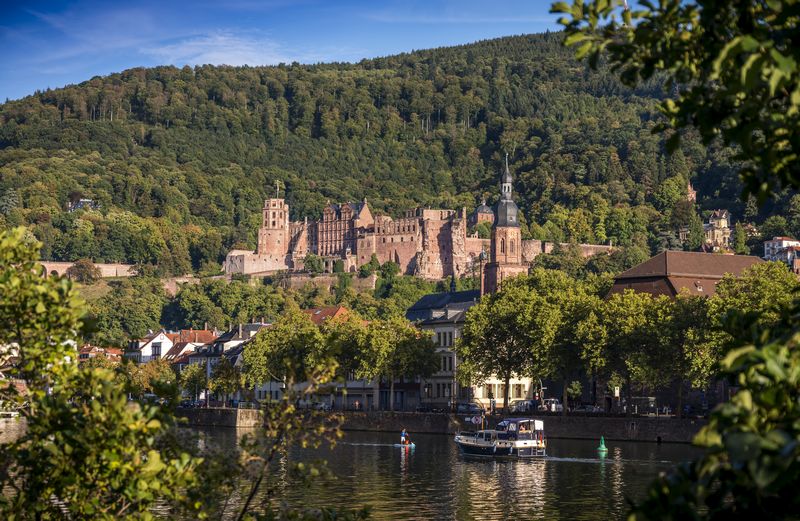 View over Neckar and Old Town to Heidelberg Palace. 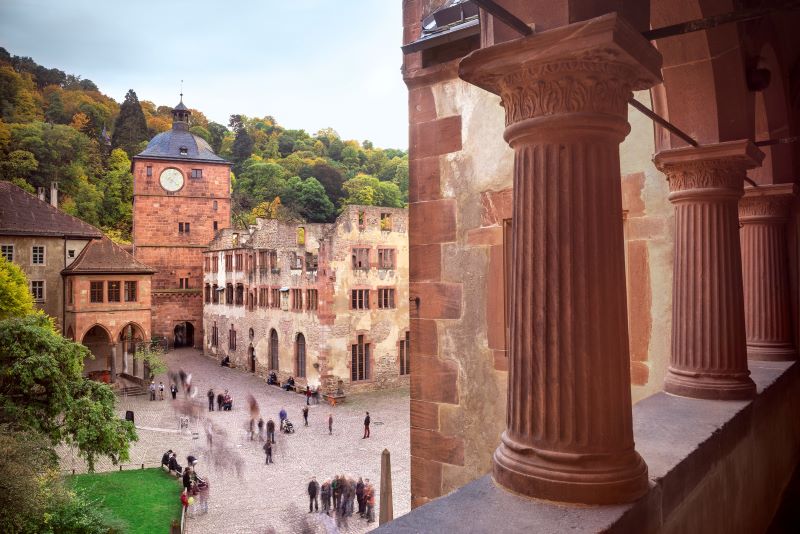 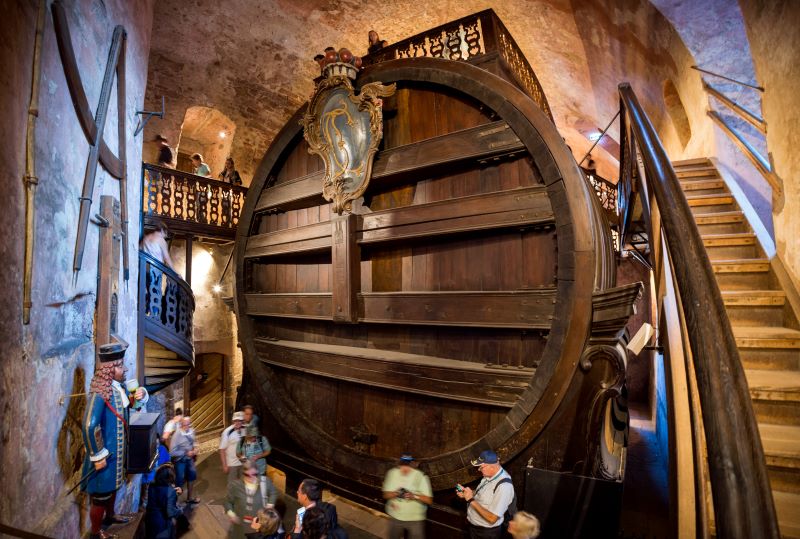 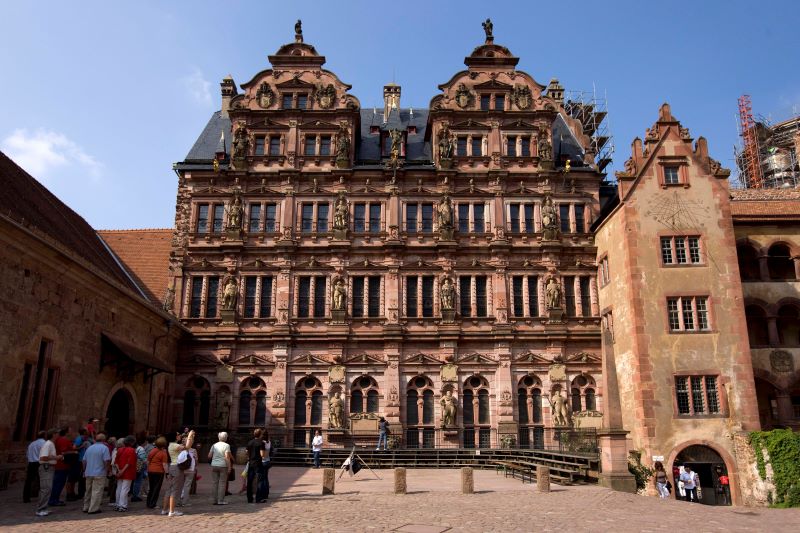 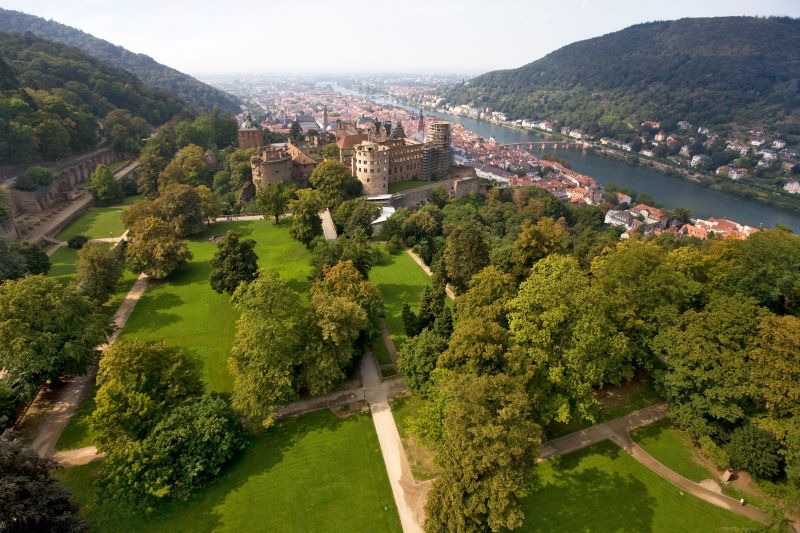 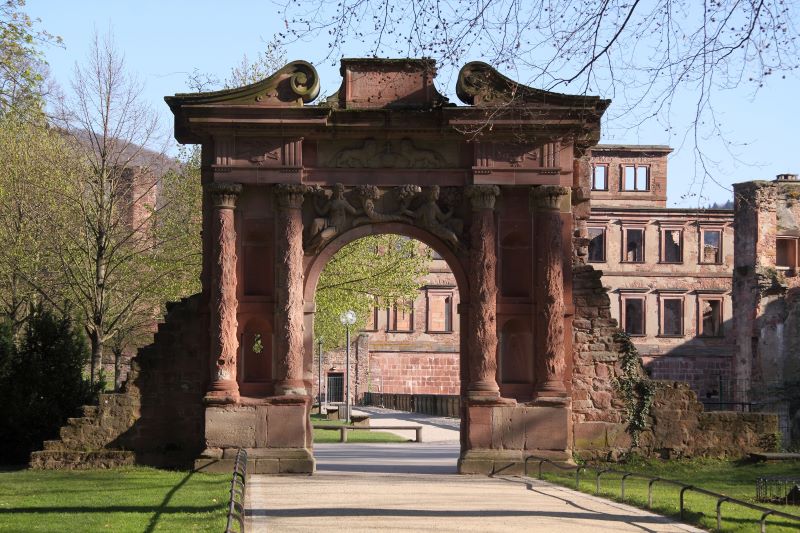 Elisabeth Gate in the Stückgarten.

The world famous ruin of Heidelberg Palace rises imposingly above the Old Town. It served as the residence for the Palatine Electors for more than 400 yeas and is today a fascinating destination for visitors from all around the world.

From the Old Town the palace is easily reached by the mountain railway. A combined ticket furthermore includes the courtyard entrance, a visit to the great barrel as well as the entrance into the German Pharmacy Museum located within the palace.

There is no consistent castle concept to be seen, compared to other residences, as the Electors built individual palaces. This created over the centuries an ensemble of representative buildings: the oldest recognizable residential building, the Ruprechtsbau around 1400, the library building around 1520-44 and the Glass Saalbau around 1549-55. Elector Ottheinrich built with the Ottheinrichbuilding one of the finest Renaissance palaces north of the Alps in 1556. Friedrich IV. built the Friedrichsbau with an ancestral portrait gallery of the Electors in 1601. Under Friedrich V. the worldfamous palace garden "Hortus Palatinus" developped as well as the English building in 1614. After the destruction of the palace during the Thirty Years War, Friedrich's son Karl-Ludwig rebuilt it. However, during the Palatine War of Succession the palace was completely destroyed by French Troops in 1688/89 and 1693 and never fully reconstructed, but precisely through this it became the epitome of Romance. Due to the engangement of Charles Count of Graimberg from 1810 on, the ruin is preserved in its present form.

Heidelberg Palace is in possession of the state of Baden-Württemberg and serves as the venue for the Heidelberg Schlossfestspiele.