On both sides of the Kocher river, the buildings of the old town rise steeply from the valley, connected by countless "Stäffele". Covered bridges, imposing medieval stone buildings such as the mighty Keckenturm or the Adelshof, towers, half-timbered houses and narrow alleys tell 2500 years of history. On the beautiful market square, architectural styles from all eras - from the Romanesque church tower to the baroque town hall - unite to form an impressive picture. Crowd pullers are the Hällisch-Fränkisches.... [More about Schwäbisch Hall] 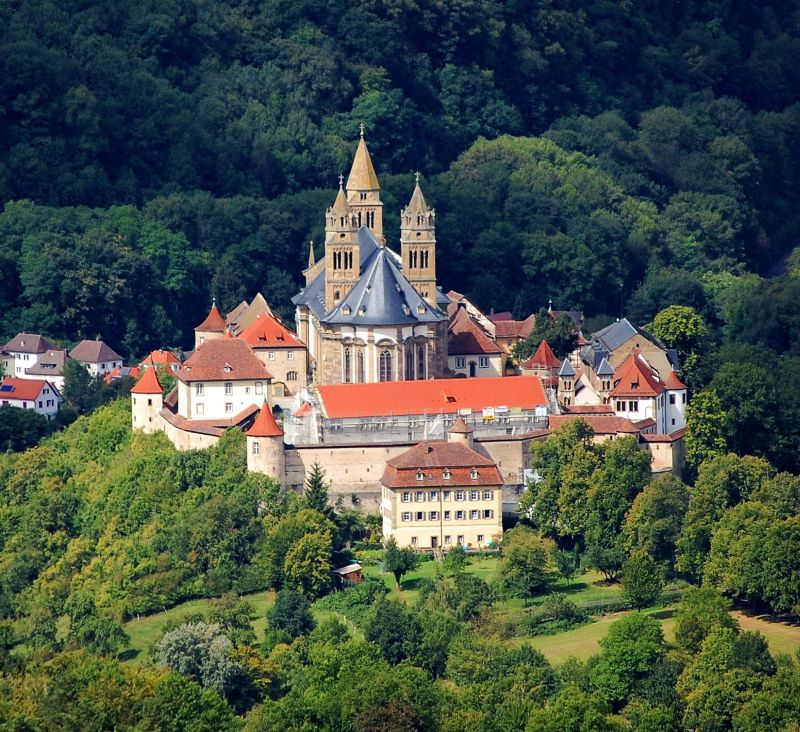 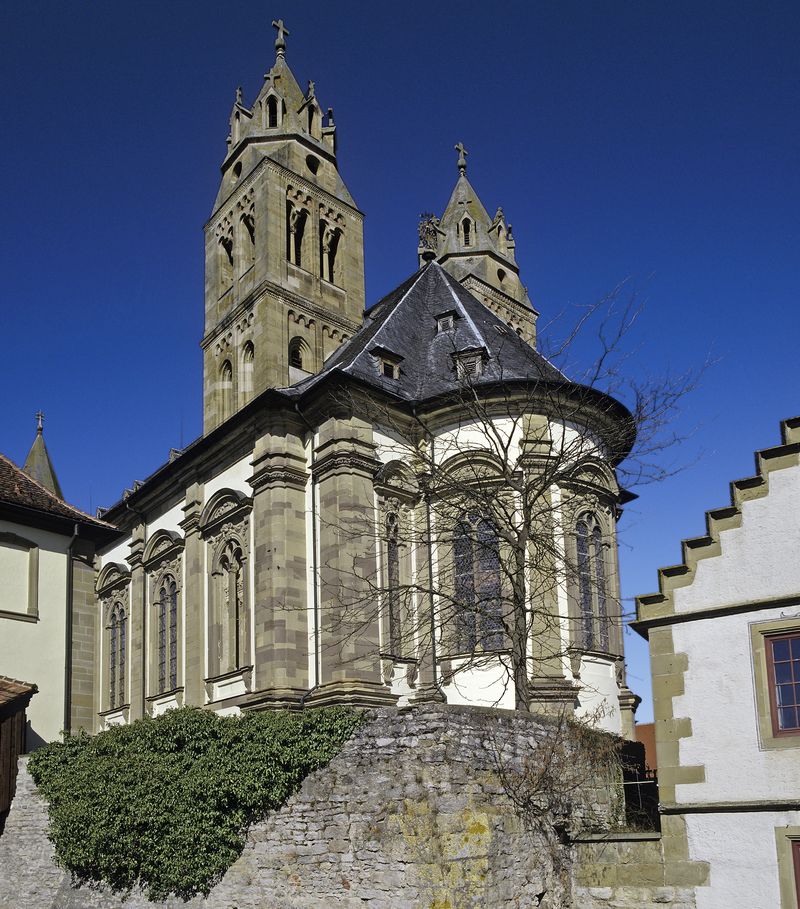 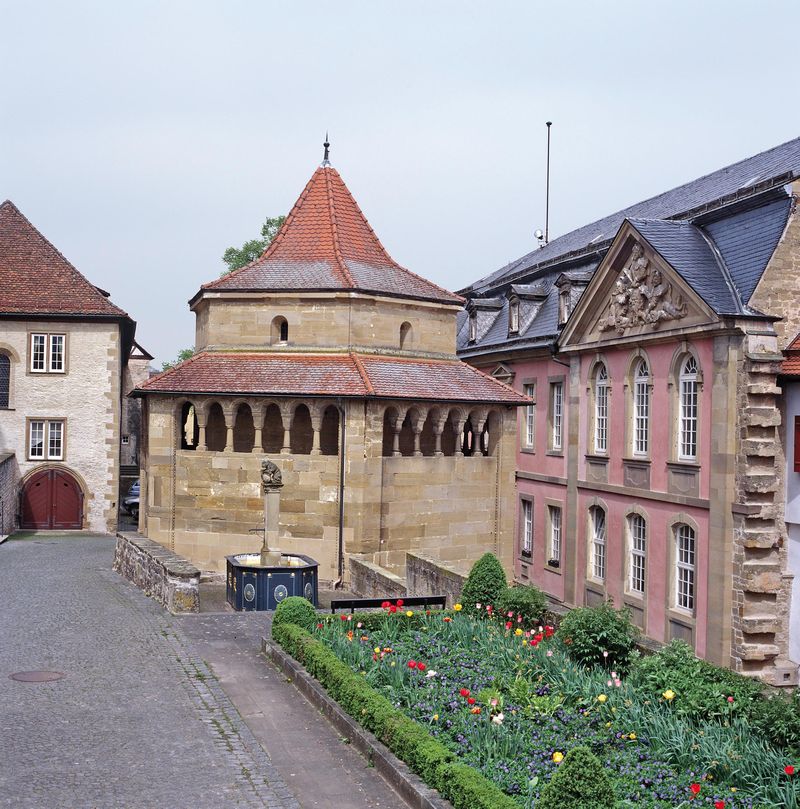 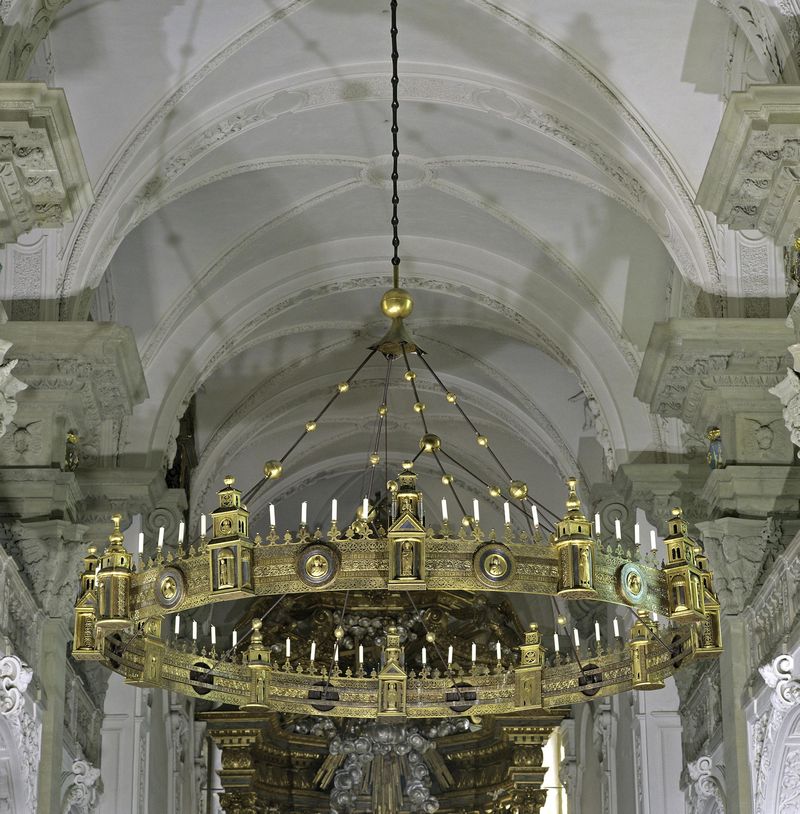 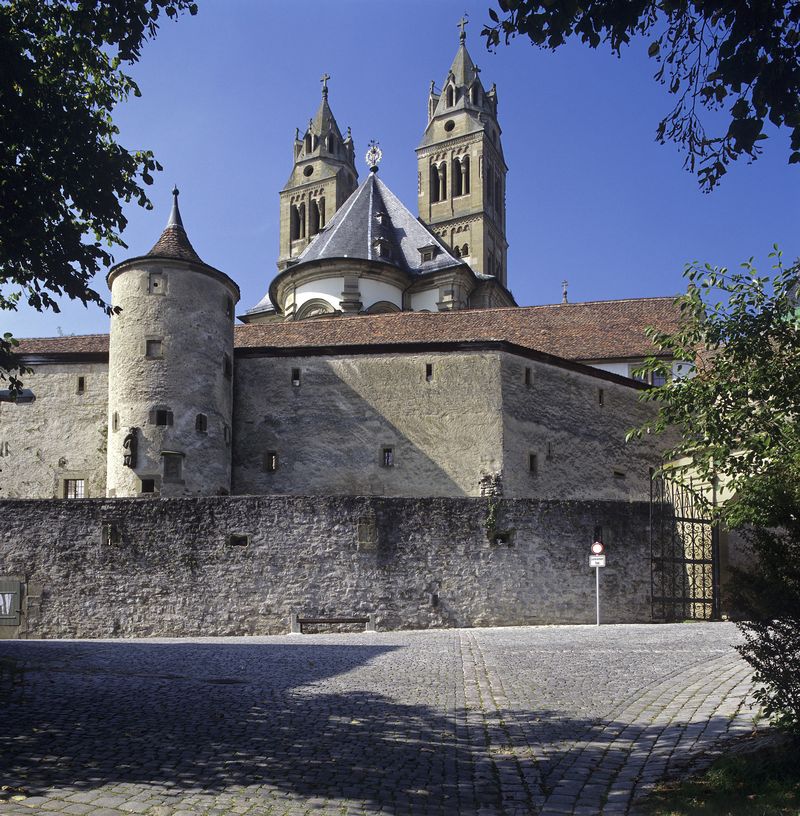 Comburg monastery is in view of the city of Schwäbisch Hall on a central hill encircled by a meander of the Kocher river. The broad castle-like complex with its churches, towers and chapels is very appealing to visitors. Around the Comburg there is a 420m long accessible wall-walk which offers stunning views over the landscape and the city.

There is a café with an exhibiton about the history of the Comburg. The outdoor area is freely accessible.

The Collegiate Church of St. Nicholas accommodates with its fire-gilded antependium and wheel-shaped chandelier two Romanesque artworks of international distinction. The wheel-shaped chandelier has a circumference of approx. 16 m and a diameter of 5 m, and is undisputedly the most precious of the three surviving examples in Aachen, Hildesheim and Schwäbisch Hall.

In 1078 Count Burkhard from Comburg-Rothenburg transformed the Comburg into a Benedictine monastery under Staufer protection and became a monk. In its hey day during the 12th century the cloister as well as the chapter house were built. At the end of the Staufer period, during the 13th century, the Comburg's decline began. In 1488 it was transformed into a canon monastery for noblemen. In the 16th century the nowadays still fortified-looking complex received its current appearance through comprehensive restructuring, where also the wall-walk along the 460m long curtain wall developed.

The widely visible Collegiate Church of St. Nicholas was transformed from an originally Romanesque pillar basilica into a Baroque church in the 18th century.

In 1802 the monastery fell into the hands of Württemberg, the canon monastery was abolished. From 1807-10 it served as an appanage castle for Prince Paul from Württemberg, from 1817 until 1909 as the seat of the royal-württembergian disabled person-corps for invalid poor soldiers and from 1926 as the seat for the first folk high school in Württemberg. As from 1934 a Nazi training institution was located there and from 1939 prisoners of war were kept there.

Since 1947 the Comburg serves as a facility for the Landesakademie for teacher training. Meetings are possible.