Öhringen is the largest town in Hohenlohe, the region between the idyllic river valleys of Kocher, Jagst and Tauber. Due to its location, the "secret capital" of Hohenlohe has always been of great importance as an administrative seat and economic centre. The market place, framed by the collegiate church, castle and half-timbered ensembles, forms the busy "living room" of Öhringen. Guests can enjoy a wide range of events, museums and, last but not least, a medieval old town with a varied mixture.... [More about Öhringen] 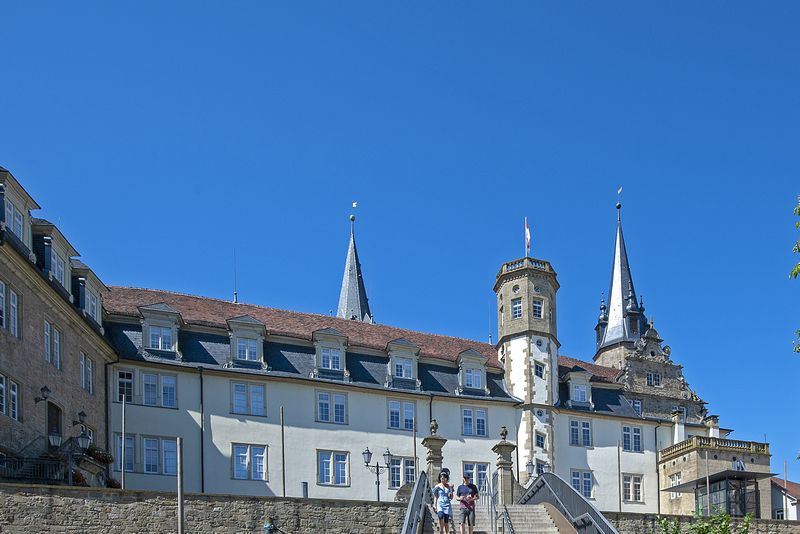 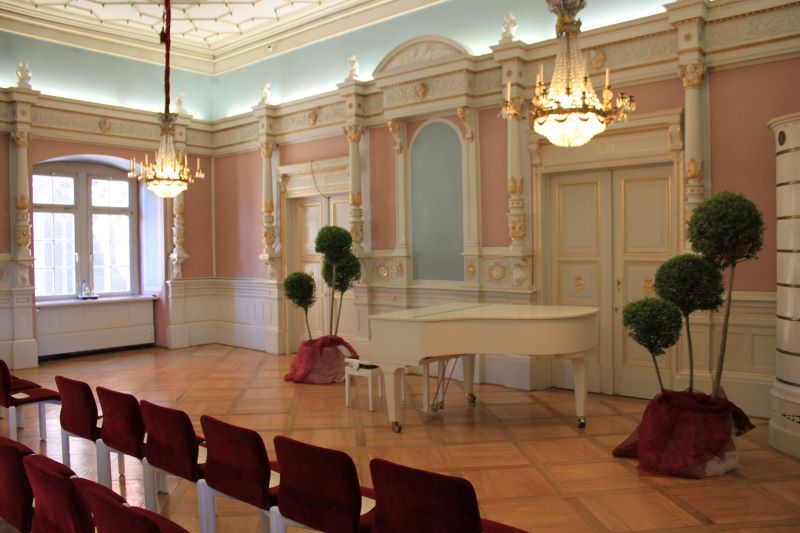 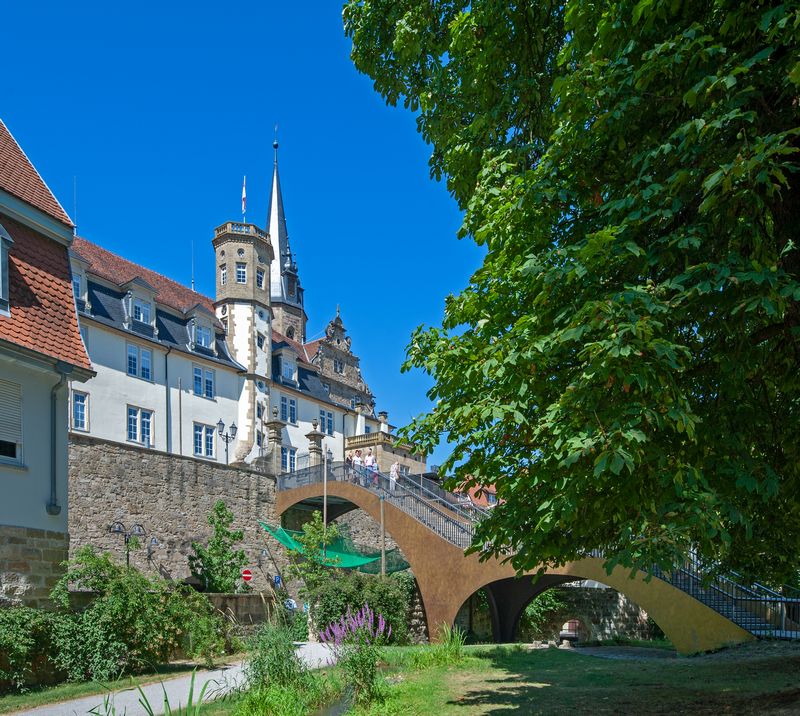 Öhringen - Open staircase to the palace. 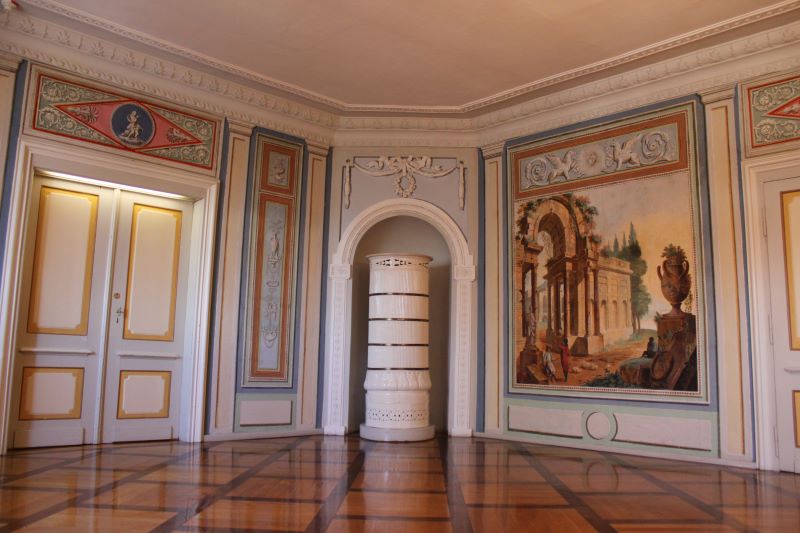 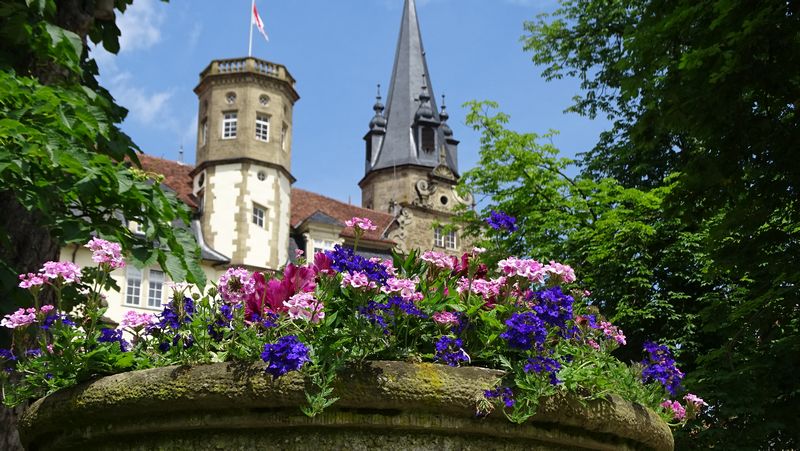 Öhringen - View from the court garden to the castle. 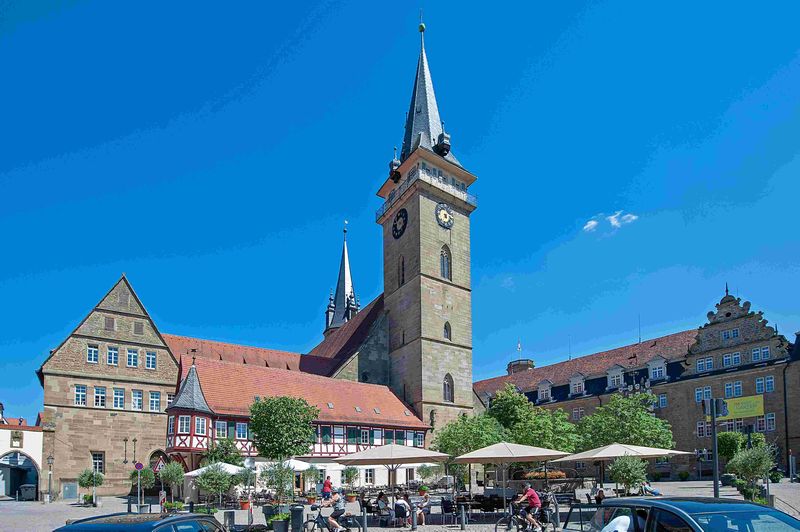 The castle of Öhringen lies in the heart of the city directly on the marketplace. Today, the splendid Renaissance building serves as the seat of the city administration. The tourist information is also located there. During working hours visitors can have a look inside the rooms of the castle, provided that they are not occupied. If interested, visitors can simply get in touch with the tourist information.

The castle was build in Renaissance style in 1611 according to plans of architect Georg Kern from Hohenlohe and served as the widow's seat for Countess Magdalena from Hohenlohe, half sister of Wilhelm of Orange, until 1633.

After an estate distribution, Öhringen became capital city under Count Johann Friedrich I from Hohenlohe- Neuenstein in 1677. He suggested the attachment of the Marstall to the already existing "Long building". Just like his son Johann Friedrich II, who became count in 1764, other successors also carried out structural extensions and changes. Between 1770 and 1775 the Remisenbau and the outside staircase in the castle courtyard developed as well as the Prinzenbau in 1812/13. Between 1845 and 1847 the staterooms blue hall, dining hall and white hall were renovated.

In 1848/49 the Princely Family transferred their residence to Slawentzitz in Upper Silesia. After the loss of their local possessions, August zu Hohenlohe-Öhringen returned with his family to the castle of Öhringen in 1945 and lived in the south wing until his death in 1962. In the other parts of the castle different tenants were accommodated.

In 1961 the city purchased the castle with the courtyard garden and renovated it from 1976 until 1987. 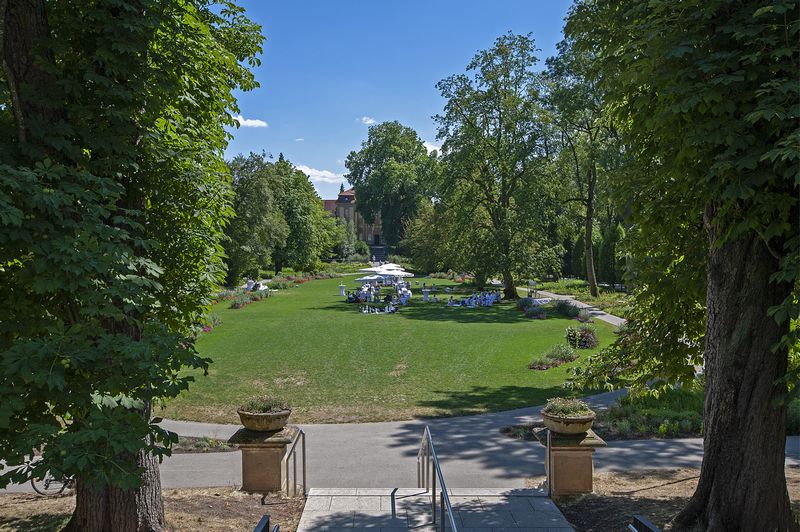 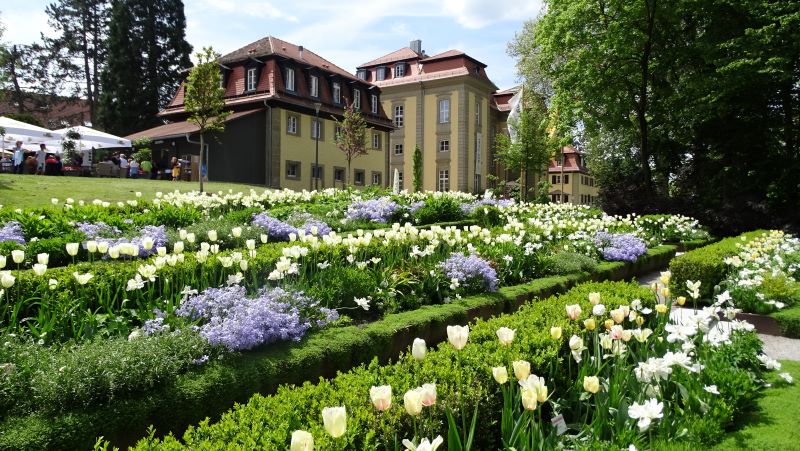 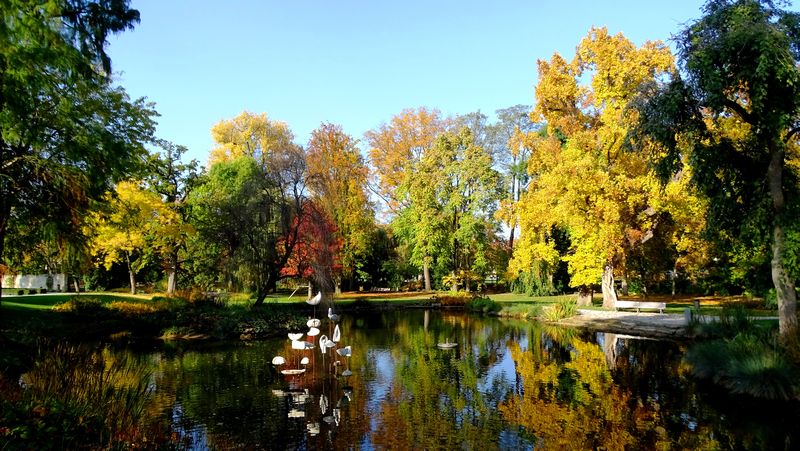 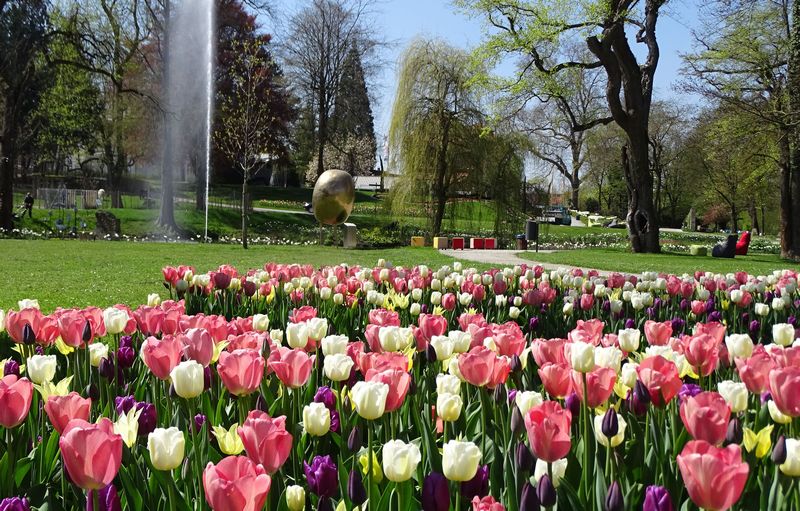 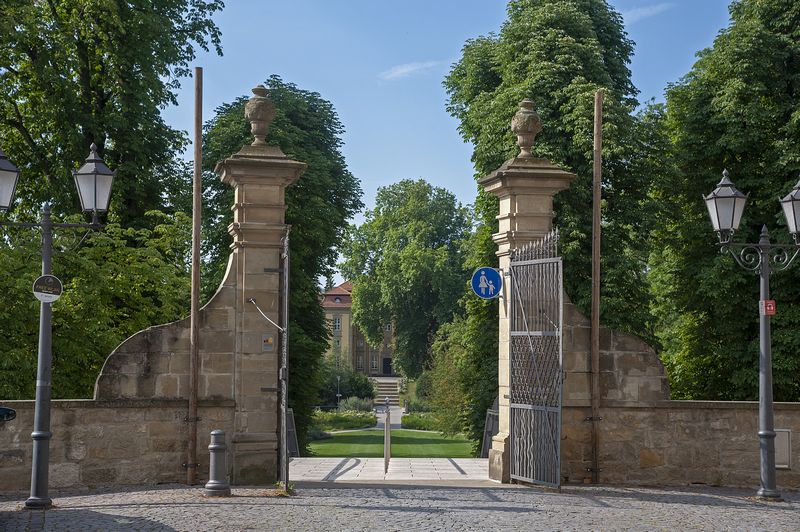 A large flight of steps leads from the courtyard of Öhringen Castle to the courtyard garden, through which the Ohrn River flows. With its centuries-old tree population, watercourse, animal enclosure, sound garden, orangery and various playgrounds, it is the green oasis in the middle of the city. One axis leads from the palace to the former court theatre, which was designed as a baroque "Lusthaus" and can now be rented for events.

The grounds of today's Court Garden were gradually acquired by Count Johann Friedrich II of Hohenlohe-Neuenstein from 1713 onwards. The garden, initially laid out in the French style, was later supplemented by an English park. Along with the castle, the city of Öhringen also acquired the court garden in 1961. 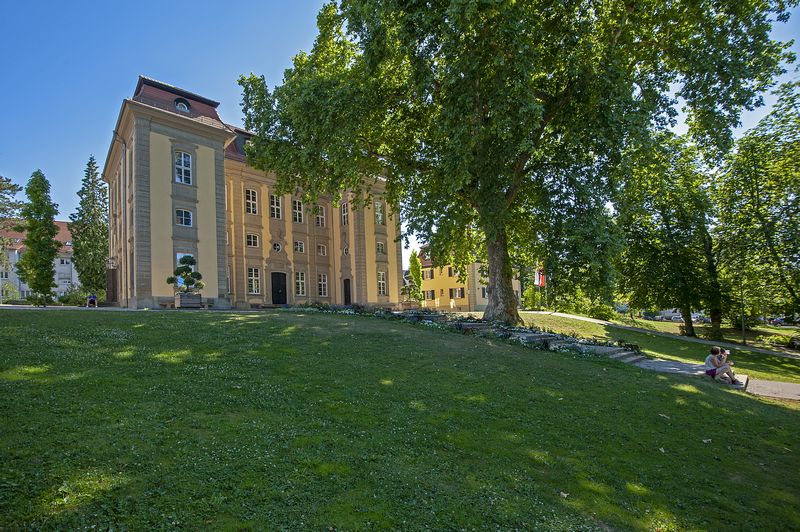 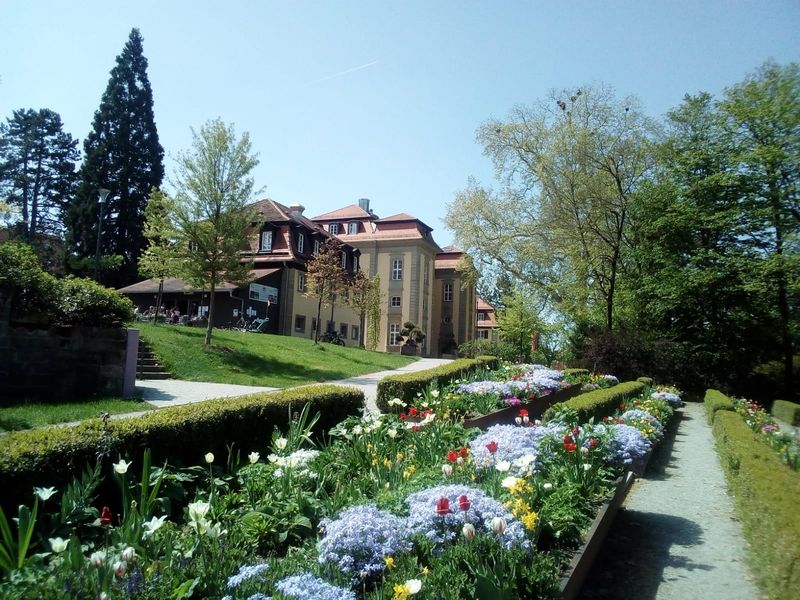 At the end of the north-south axis running through the Court Garden stands the former Court Theatre. Count Johann Friedrich II of Hohenlohe-Neuenstein-Öhringen, who had acquired the land between Ohrn and Uhlandstraße in 1743 for the southern extension of the Court Garden, had the building erected as a Baroque pleasure house. In 1745, two flanking greenhouses with sloping glazing were built. The ground floor was originally used as an orangery, the high upper floor was converted into a theatre hall with stage and tier in 1787. Since then, the building has been known as the "Court Theatre".

After being used for school rooms, as a community centre and a municipal library, it is now a sought-after address for festive events following general renovation.