The very special thing about Neckarbischofsheim is the extensive castle park in the heart of the small town, which is situated on the border to the Kraichgau and the Odenwald. On a walking tour, the visitor encounters a wealth of historical buildings: Totenkirche (Church of the Dead), Altes Schloss (Old Castle), Pentagonal Tower, Altes Rathaus (Old Town Hall), to name only the most important ones. Since 2010, the historic rail bus "Roter Flitzer" has been operating in the idyllic Krebsbach Valley.... [More about Neckarbischofsheim] 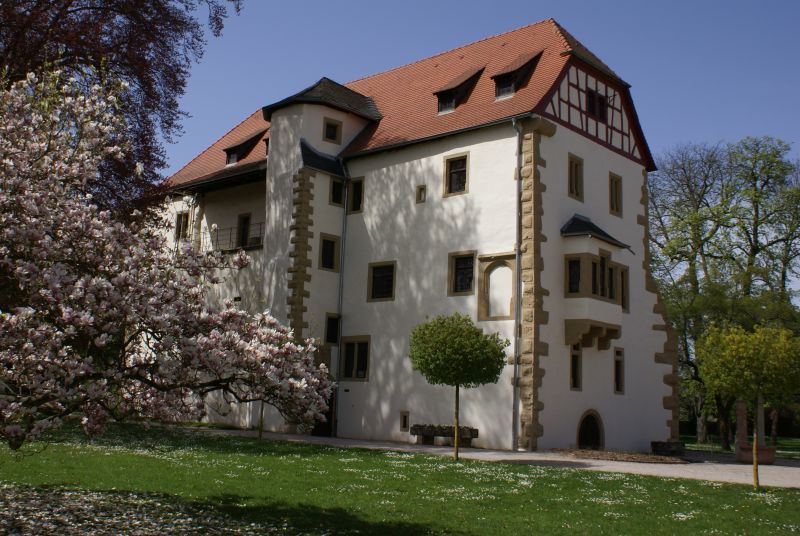 The Old Castle, also called Stone Castle, is situated in the idyllic 2.6-hectare castle park right in centre of the small town of Neckarsbischofsheim. Today the Knights’s Hall is used for formal events and exhibitions, however, it is also available for wedding ceremonies.

The Old Castle dates back to the castle of Dieter von Helmstatt which had been recognized as a fief by King Rudolph von Habsburg in 1274. Within the course of the castle's expansion, the Old Castle was built as a Palas (great hall, the main residential tract of a medieval castle) by the brothers Raban III and Wiprecht von Helmstatt. Today it is the only building left of the former complex. The Stone House's present-day appearance goes back to rebuilding works carried out in the 16th century; the Staircase Tower with the Helmstatt-Neipperg Alliance coat of arms goes back to the year 1546.
In the Thirty Years’ War the Old Castle served as headquarters of the famous military leader Count Tilly from 6 March until 4 April 1622. From here he commanded the preparations for the siege of Heidelberg, however, he had to flee from the Palatine troops.

After the Bischofsheim lineage von Helmstatt had died out in 1966, the building passed into the possession of the town in 1975, and was extensively restored by them in the years from 1976-78. In the castle’s interior, in particular, in the Knight’s Hall, impressive mural paintings from the 15th century and the 16th century were exposed. 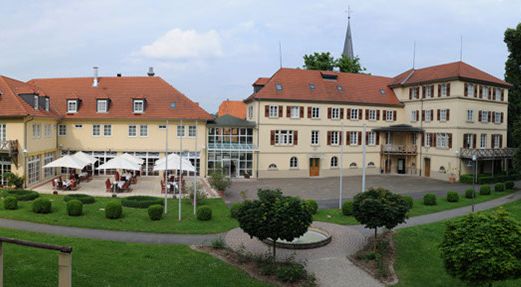 The Old Castle is located opposite the New Castle, likewise surrounded by the idyllic castle park in the heart of the small town.

Its former building was the “New Stone House", of which it is assumed that it - just like the Palas (the great hall) - had been erected in the section of the inner bailey or ward during the expansion works performed on the former castle fortification in the late 14th century. This building was demolished in 1829. On its former site, Ludwig Nepomuk von Helmstatt had a three-storey angular construction built.

After the Bischofsheim lineage von Helmstatt had died out, who originally had been the owners of the Old and New Castles for centuries, the New Castle also passed into the possession of the town of Neckarsbischofsheim.