Hirschhorn is called the "Pearl of the Neckar Valley". Here, the Neckar forms a tight double loop and makes this scenic feature the counterpart of an extraordinary townscape. Surrounded by the city wall, the half-timbered houses of the old town nestle against the castle and monastery. The castle complex above the town is a legacy of the lords of Hirschhorn, an important German knightly dynasty. Halfway between the castle and town is the former Carmelite monastery with its Gothic church, which is.... [More about Hirschhorn] 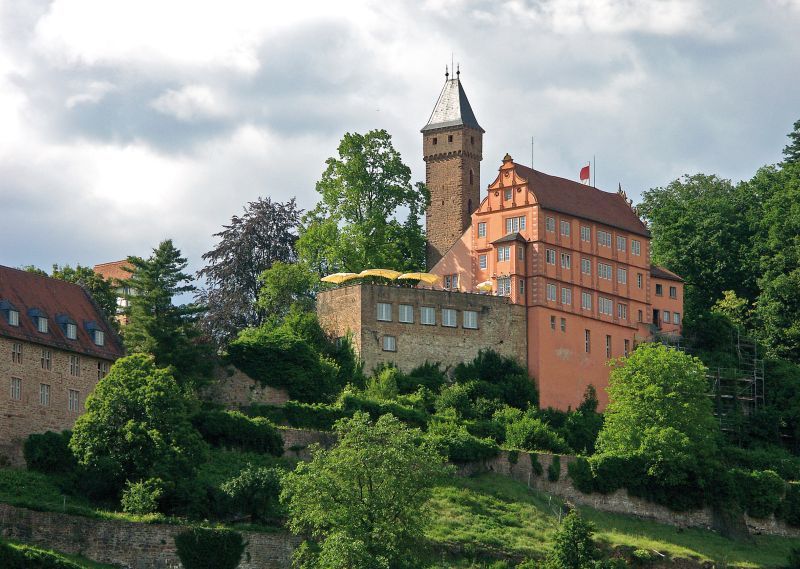 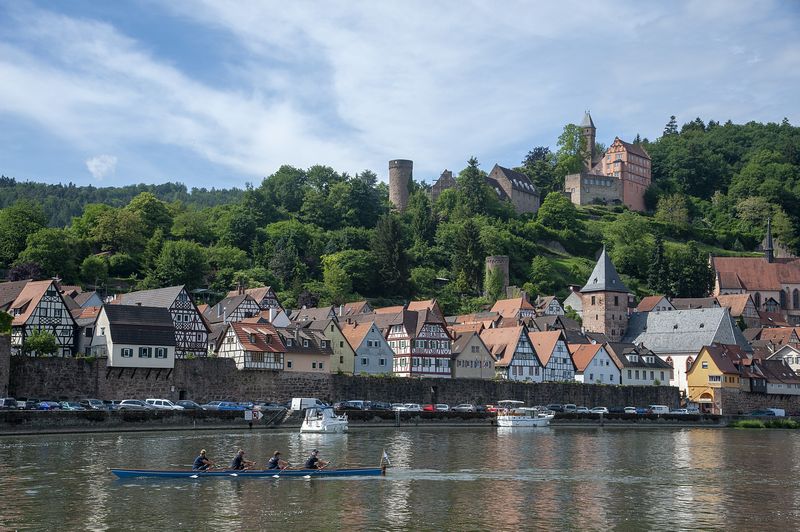 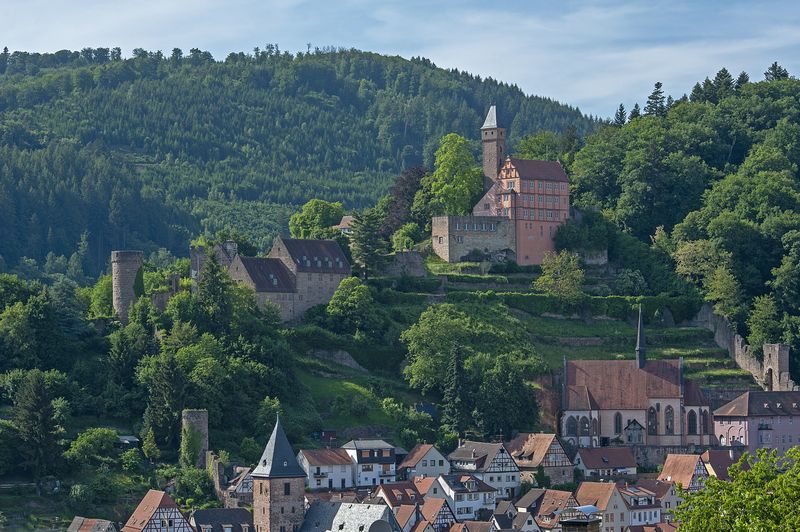 Hirshhorn - Castle high above the Town. 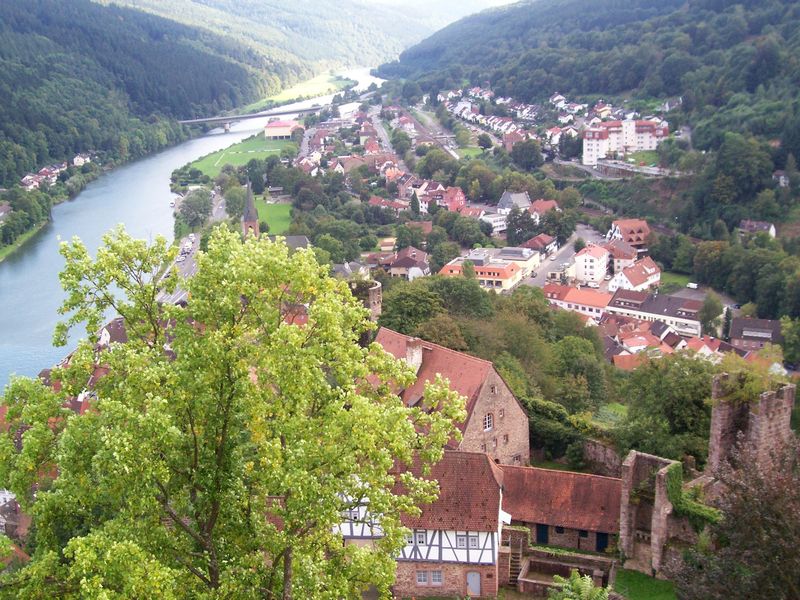 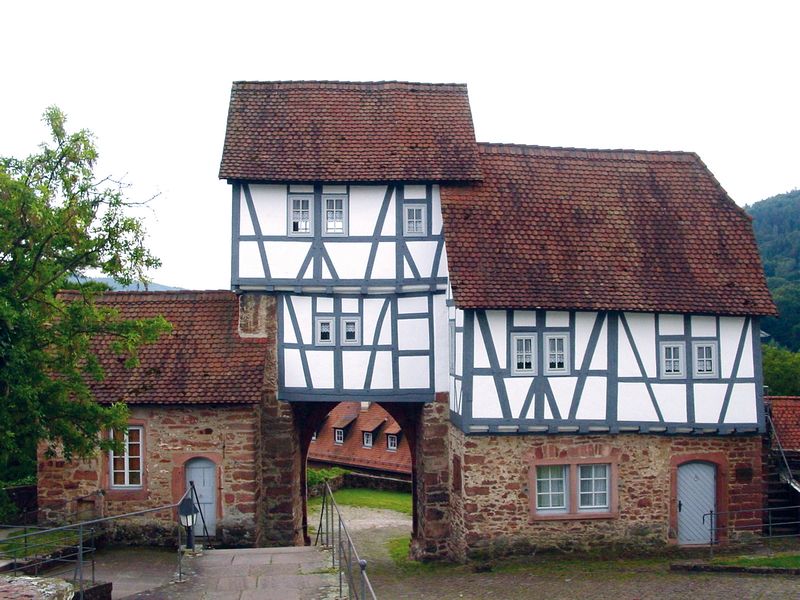 Hirschhorn Castle - House of the Guard of the castle gate. 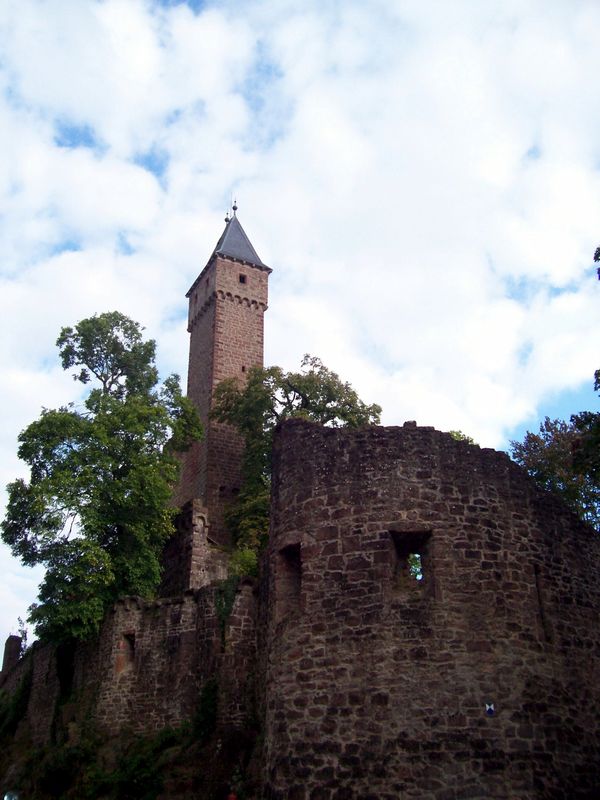 Castle Hirschhorn is located above the city Hirschhorn, the "pearl of the Neckar Valley". The courtyard and tower can be visited. The castle can be reached within half an hour on foot from the Old Town in Hirschhorn, but there are also parking spaces directly on the castle complex. Castle tours can be booked individually. The complex accommodates a hotel and a restaurant with a magnificent terrace above the Neckar Valley - currently it is closed, however, due to restoration.

The building of the Romanesque core of the castle began around 1250. It is surrounded by a 16-meter deep frontal ditch with a square enclosing wall, curtain wall, gate complex and keep. Residential apartments were built during the Gothic period around 1300; the Romanesque keep was replaced by the more slender "Witch Tower". With the economic and political rise of the lords of Hirschhorn the castle complex was extended. Thus, the conversion of the upper outer section began in the mid-14th century, the conversion of the lower outer section about 1400. The castle gained today's form by growing the palatial renaissance pallas from 1583 to 1586.

The castle was spared from major destructions. After the extinsion of the lords of Hirschhorn the castle was in possession of the Electorate of Mainz from 1632 to 1803 and served as the official residence from 1699. From 1803 to 1918 it was the official residence of the grand duchy Hessen-Darmstadt, belonged to the Volksstaat Hessen from 1918 to 1945 and has been in possession of the State of Hessen since 1949. Since 1959 a hotel and a restaurant have been located in the Palas and in the stables - currently they are closed due to restoration.