The silhouette of Ebern is characterised by six massive towers, which are reminiscent of the former "Eberner Kegelspiel". This ensemble consisted of the tower of the town parish church of St. Laurentius as the "king" and eight towers of the town fortifications. Three of the towers were inserted in the 19th century, but the others, together with the old town wall, give an impression of the town's defences. Today, on the site of the town moat, a pretty ring of grounds invites visitors for a stroll. As.... [More about Ebern] 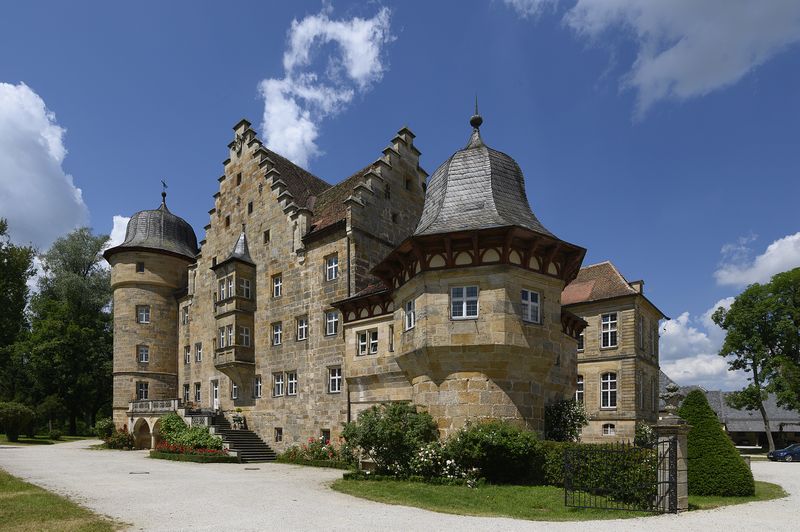 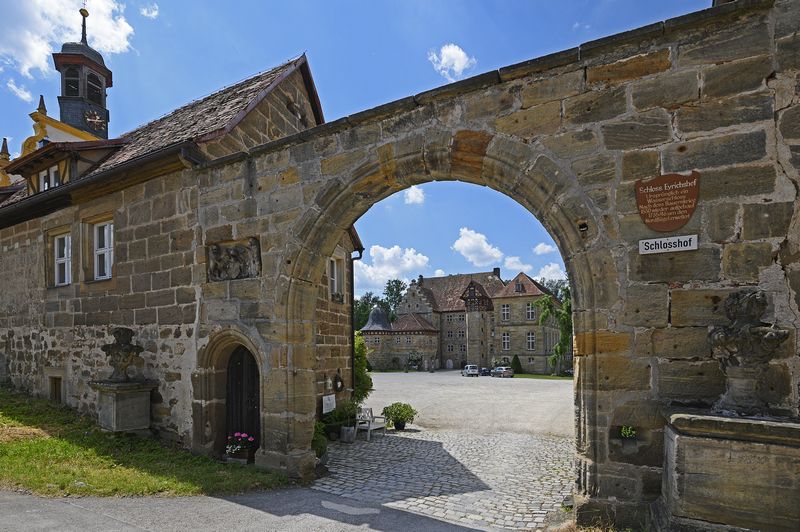 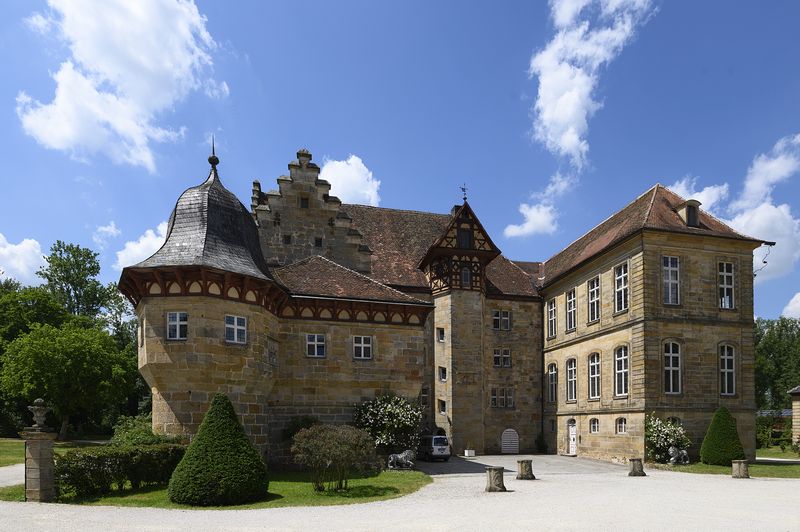 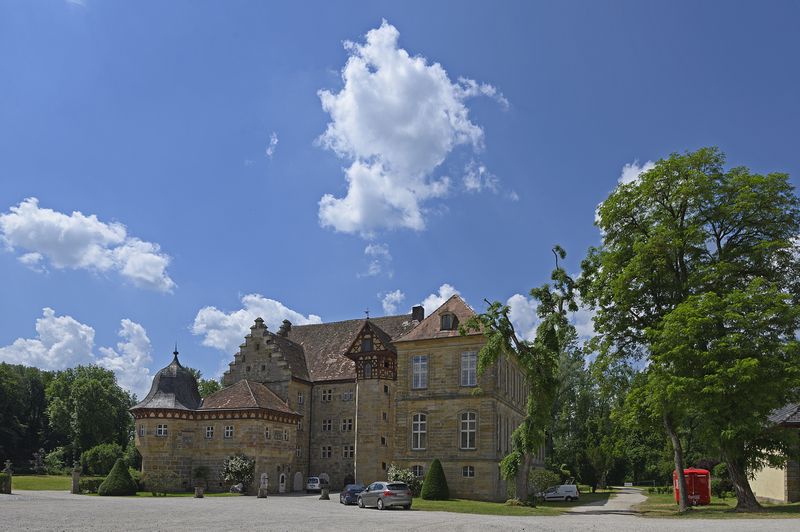 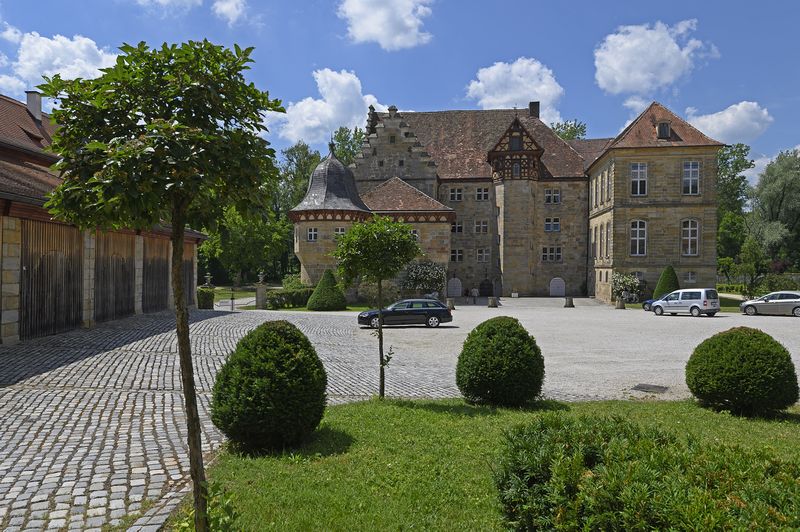 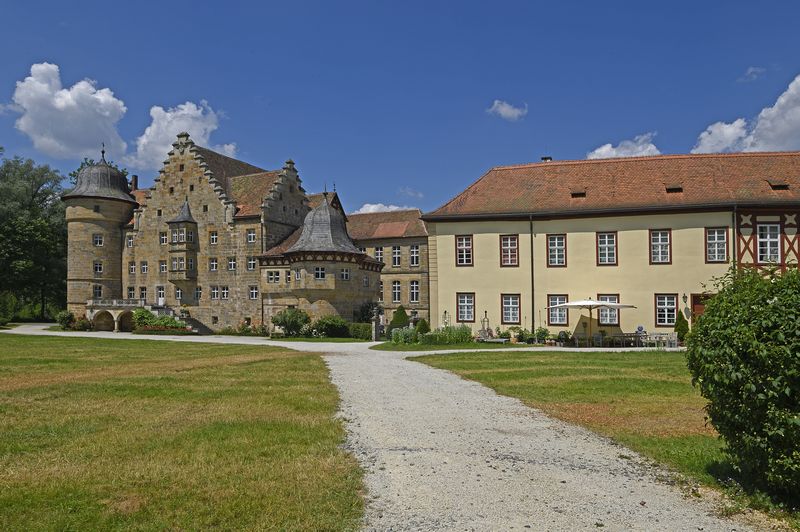 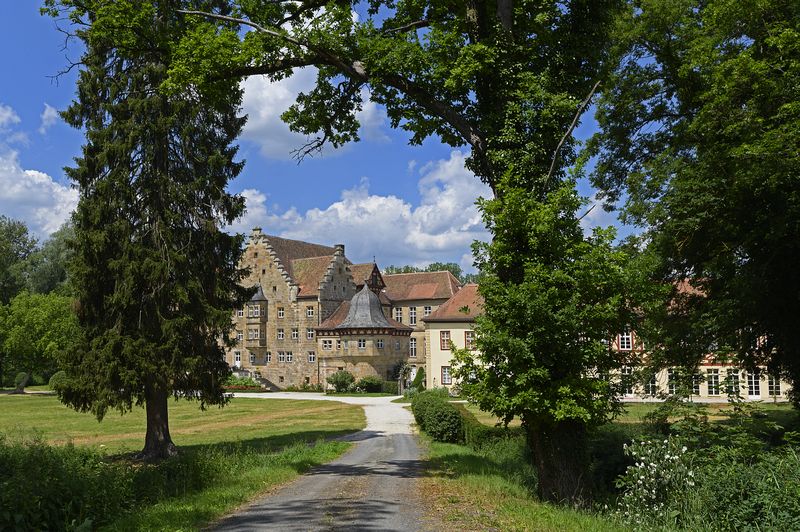 It is not without reason that the picturesque Eyrichshof Castle with its graded gables, round towers and oriels has on various occasions been the backdrop of movie and television shooting. The roots of this impressive complex go far back to the 14th century. After the destruction of the ancestral home of the family von Rotenhan in 1323, a new castle was built at the bottom of the valley only a few years later. This castle was severely demolished in the Peasants' War of 1525. Although there must have been major compensation sums for damages, reconstruction had been progressing only slowly.
This, however, changed with Sebastian II von Rotenhan. During his time the central and the south wings were built in Renaissance style, which to the present day lends the castle its character and appearance. Following major remodelling during the Baroque period, a new north wing was built in the rococo style from 1735 until 1746. With this "added-on construction" the castle complex was complete.
In the years 1846/47 the castle was restored under Julius I von Rotenhan, in 1849/50 a large-scale English landscaped garden was laid out. The castle complex also includes an orangery and the castle church with its baroque portal. Eyrichshof Castle is privately owned by the Barons von Rotenhan.
The interior of the castle is open to the public on special occasions only, however, the front court can be visited. The castle grounds are open to the public on special occasions such as the Garden Party during the Pentecost weekend and the Eyrichshof open air (series of events in summer). 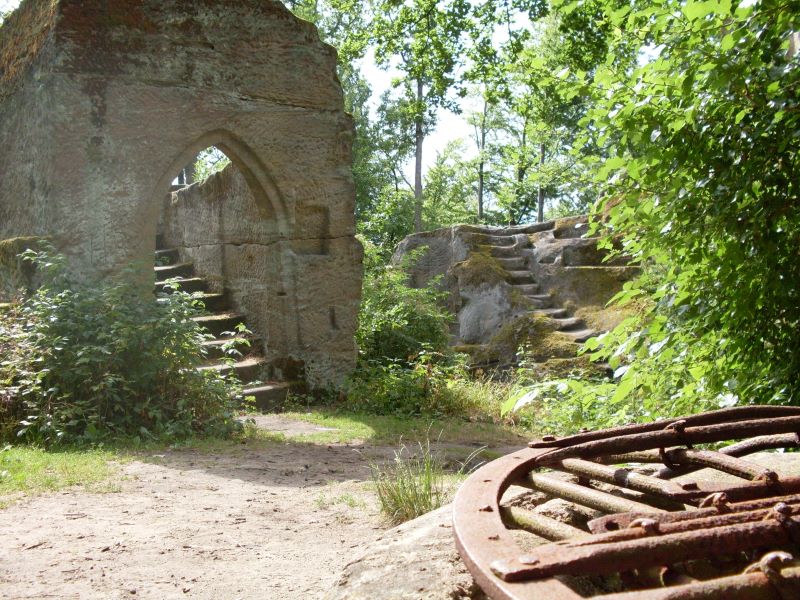 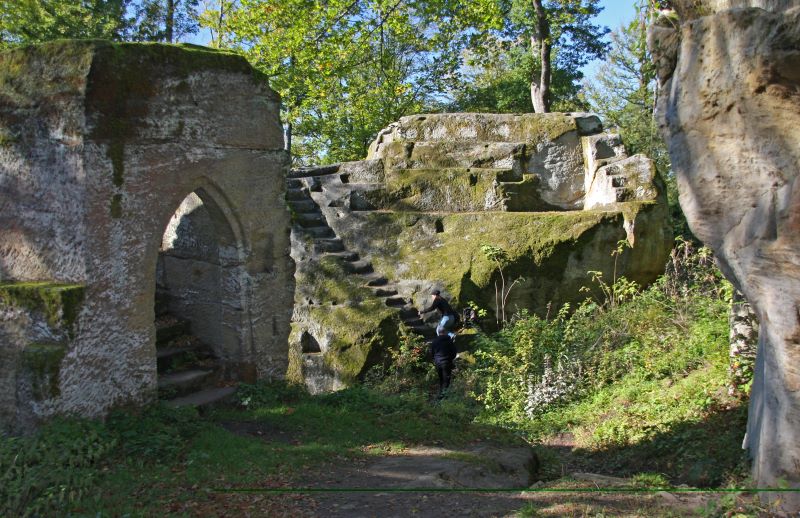 The Rotenhan Ruins are an enchanted place in the forest above Eyrichshof, a part of the town of Ebern. They are counted among the most unusual castle complexes in Germany. They are an outstanding example of natural rock formations integrated in a castle building: Five huge boulders situated next to each other and connected by walls shape the heart of the complex; the entrance to the castle is carved into solid rock. The castle was built in the 12th century under Wolfram von Rotenhan and was the home seat of the Barons von Rotenhan, who served the bishops of Bamberg. This noble family was first mentioned in records in 1190 and still today lives in the Haßberge hill chain region. The castle of the Bamberg bishops located near Ebern, a town belonging to the Bishopric of Würzburg, might have been a thorn in the side of Wolfram Wolfskeel of Grumbach, the Bishop of Würzburg. On the pretext of counterfeiting on the side of the noble family he is said to have laid siege to the Rotenhan castle for about a year and to have destroyed it in the end. A contract dating back to the year 1324 prohibited the reconstruction of the castle, which is the reason why the family built their new residence in Eyrichsdorf, below the destroyed castle. The Rotenhan Ruins, however, are still today in their possession. Due to their architectural and geological characteristics they are counted among Bavaria’s most important hundred geotopes awarded by the Bavarian State Ministry for Environment. In addition, the Rotenhan Ruins are one station along the “Burgenkundlicher Lehrpfad” (“Castle Information Trail”) of the district of Haßberge. They are open to the public at all times.