The market-town of Rentweinsdorf lies four kilometres (2.5 miles) south of Ebern in the Baunachgrund on the B 279. Often the name of a place gives clues to the history of its creation and settlement. However, this is particularly difficult for Rentweinsdorf as historians can offer no fewer than three possible meanings. As an area of settlement Rentweinsdorf appears for the first time as the estate of the Dukes of Meran, who sold it in around 1200 to the Counts of Truhendigen. In their day the small.... [More about Rentweinsdorf] 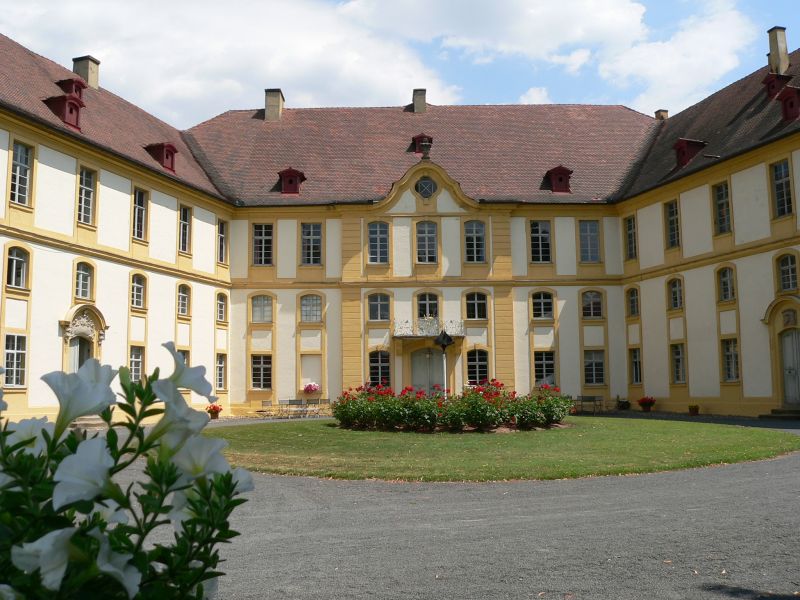 The elegant three-winged building from the rococo period shapes the cityscape significantly. Up until the present day, the complex has been inhabited by the von Rotenhan family; it is not open to the public.

Since the 13th century Rentweinsdorf has been in the possession of the Lords of Rotenhan, a widely branching noble lineage in the Haßberge region. The first complex in Rentweinsdorf was a so-called Ganerbenburg, a castle complex where several branches of this family lived together. One prominent member of the family at that time was Sebastian von Rotenhan, who drew the first map of Franconia around 1519.
During the Peasants’ War in 1525 the castle was damaged for the first time and again in the Thirty Years’ War. For this reason, Johann Friedrich II von Rotenhan had an elegant, three-winged rococo construction built on the castle's old foundations. According to the plans of Johann David Steingruber from the town of Ansbach, the north wing was built as of 1751, the main wing was finished in 1756 and the south wing in 1766. Situated east of the building is a large castle park, first laid out as a French garden, however, redesigned into an English landscaped garden around 1800 according to the prevailing taste at that time. The baroque orangery, built in 1774, is situated inside the park.
The palace's original interior design has hardly been altered. Especially noteworthy is the middle wing’s “Great Hall” designed with faiences and rococo stucco. Extensive restoration works on the castle have been carried out in the past decades. The two side wings house living spaces, administrative rooms of the property as well as the archive of the family.