From the Weisach-Baunach ground, the view to the north of Altenstein appears as if painted: A towering mountain in front of a cloudy sky, at its top a church, a castle and red roofed houses. The motif has already inspired many painters and photographers, especially when in April the cherry trees on the slopes shine in white blossom. Also thanks to its exposed location, the state-approved resort of Altenstein with its mighty castle ruins is a landmark in the Hassberg Nature Park. The mountain village.... [More about Maroldsweisach] 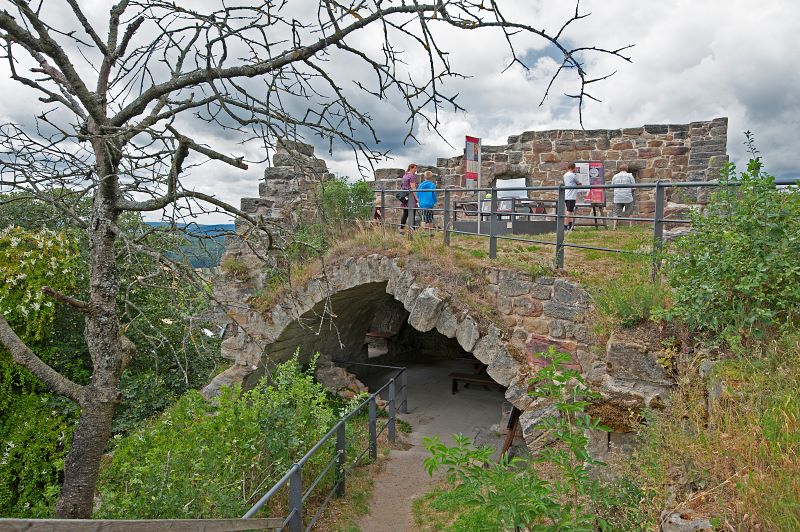 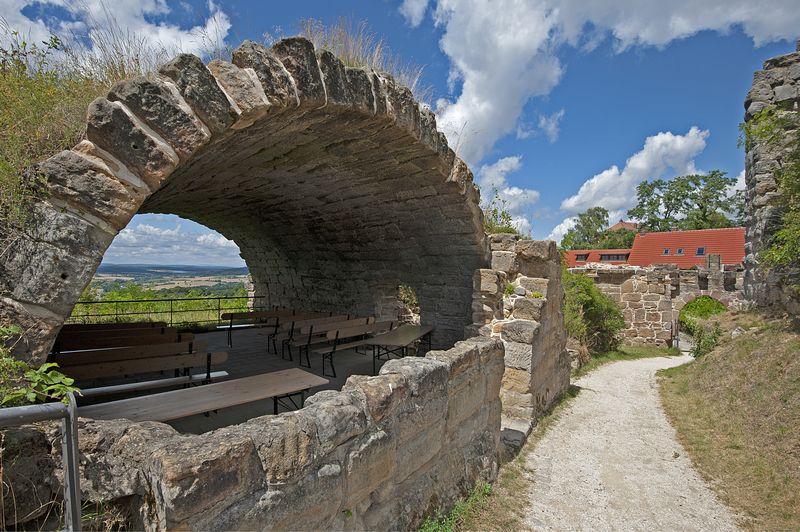 The castle ruins of Altenstein are perched impressively high (458 metres) on a rock plateau above the Weisachtal valley - even today one can imagine the castle’s former magnitude. The castle is successfully developed and one of the destinations along the "Burgenkundlicher Lehrpfad", the "Castle Information Trail" of the district of Haßberge. Furthermore, 14 experience stations of the neighboring castle information centre are installed here. Open to the public. Guided group tours can be booked via the Burg- und Heimatverein (local castle and historic association) (Reservations: Nico Kapp, chairman, phone +49 (0) 95 35/12 11).

Shortly after 1200 the Knights von Stein had split into two branches, the "von Lichtenstein" line and the "von Altenstein" line. Both of them had to do service to the Prince-Bishopric of Würzburg. The castle was the ancestral seat of the Lords of Stein von Altenstein, the name was first mentioned in records in 1225. The castle itself, which controlled the route from Bamberg to the North, was first mentioned in 1232. The complex had been a so-called Ganerbenburg for a long time, which meant that it was inhabited by various noble families at the same time.
In the Peasants’ War from 1525 the castle was severely damaged for the first time. It was restored under Wolf Dietrich von Stein and again destroyed in the Thirty Years’s War in 1634. After a makeshift repair around 1670 the castle was inhabited by the Lords of Stein von Altenstein until 1703. They then abandoned their ancestral home and moved into their newly built castle in Pfaffendorf in the valley.
The castle fell into ruin, in 1859 it passed into the possession of the Counts von Linden and in 1895 into the possession of the Barons von Rotenhan who gave the castle complex as a present to the district of Haßberge in 1972.