On the 10th March 1954 the cities Mannheim, Heidelberg, Heilbronn, Rothenburg o.d.T., Ansbach and Nürnberg merged in order to form a joint venture. Their aim was to open up the attractive holiday- and excursionareas to the left and to right of this compound , which then ran as the only west-east-direction, for tourists. 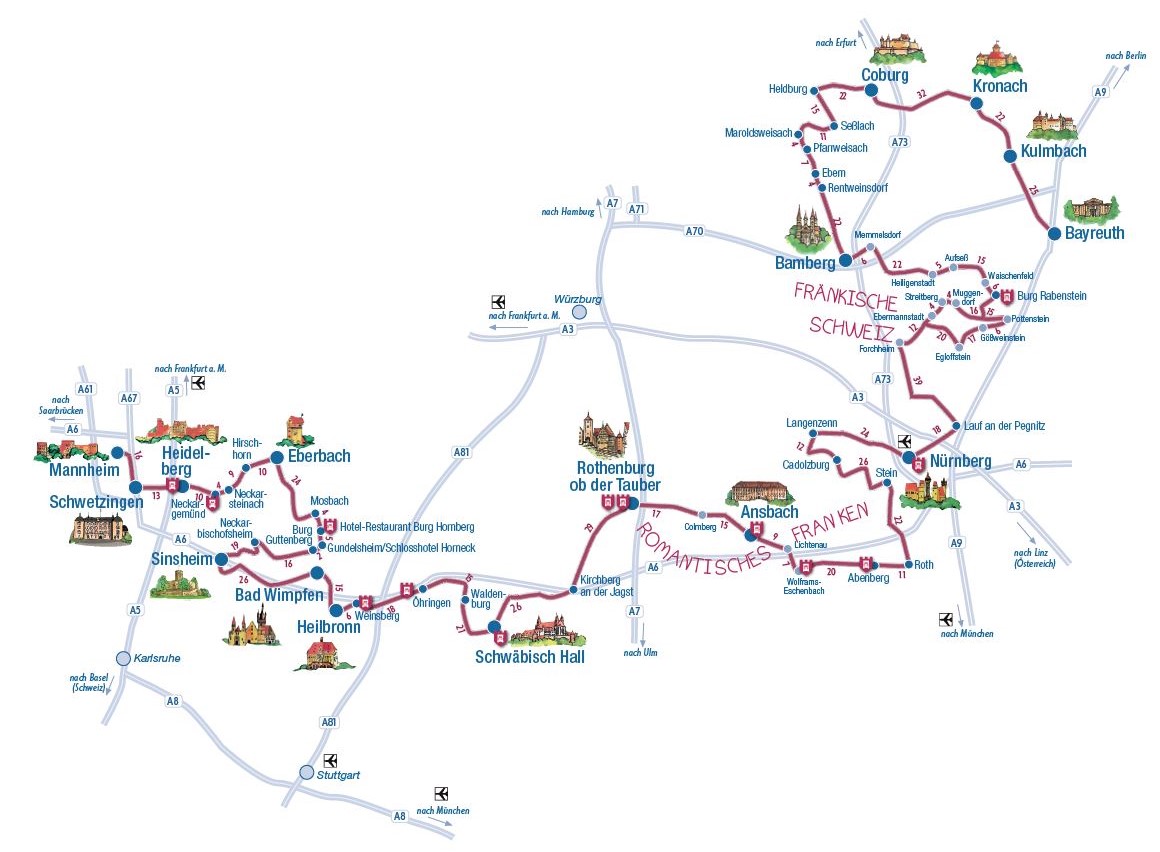 This makes it one of the first tourist routes to be established in Germany. The road owes its name to the numerous castles and palaces, and it was quite clear from the beginning that only the name “Castle Road” would be appropriate.

The founding initiative originated in Heilbronn and, to this day, this historic town has been the domicile of the administrative office. Heilbronn has always supported and promoted this initiative and has made a significant contribution to the continuity and success of the work of the Castle Road.

The German Federal Railway Authority set up a bus line of the same name - and this name quickly became known worldwide. In May 1954 the first press trips “From the Neckarstrand to Franconia” took place. Travelling in conjunction with learning about history and culture had become possible for many people less than 10 years after the end of World War II.

At the beginning of the 1990s, it became possible to establish contacts with the Czech Republic due to the opening of the borders to the east. In 1994, the year of the 40th anniversary of the Castle Road, the road was extended as far as Prague, which lasted until the end of 2017.

Since 2018, Bayreuth has been both the new starting point as well as the final destination of the Castle Road, because the cooperation with the Czech partners could not be continued. New members were added to the route in Germany.

Today the Castle Road is an association whose members include towns and municipalities along the route. For a place to be become a member, the presence of a fortress, a castle or palace, a monastery or an historic old town is required.

In addition to the interaction with its members, the Castle Road focuses on a close and continuous cooperation with partners from culture and tourism such as the State-Owned Palaces and Gardens of Baden-Wuerttemberg and the Premium Partner Hotels. This network of owner-operated establishments along the Route opens up a new dimension of preparing quotations and providing a wide range of services for its guests.