Coburg is idyllically located in the north of Bavaria, between the upper Main valley and the Thuringian forest, which thanks to the Dukes of Saxe-Coburg and Gotha has an abundance of historical buildings, art treasures, fortresses and castles. There was an early settlement dating from the 9th and 10th centuries at the foot of the castle complex. In 1056 the name of Coburg was first mentioned, the naming of the town followed in 1182. In 1240 a Franciscan monastery was established. From 1250 to 1290.... [More about Coburg] 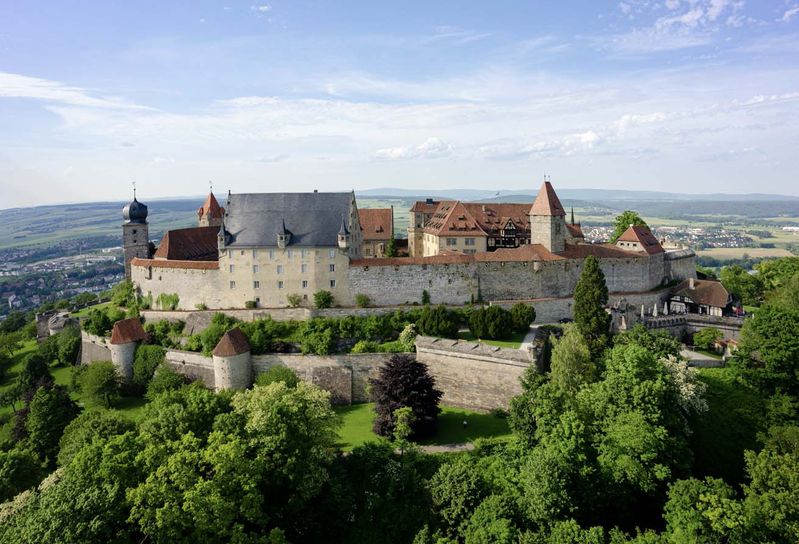 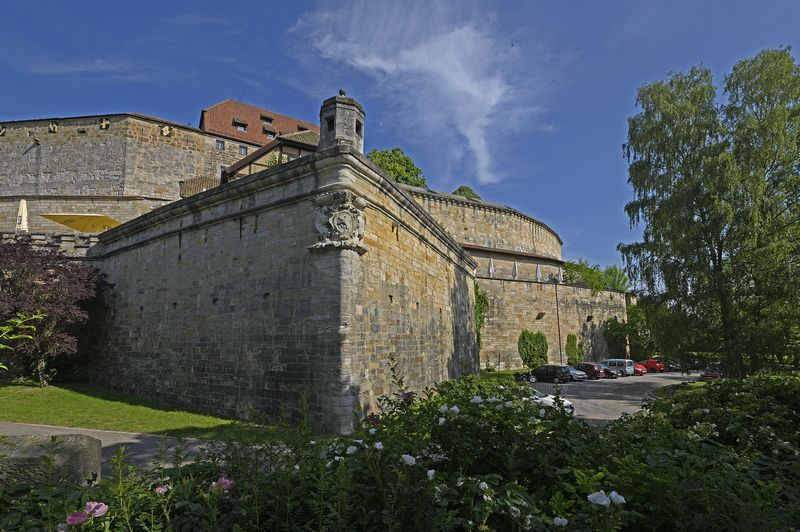 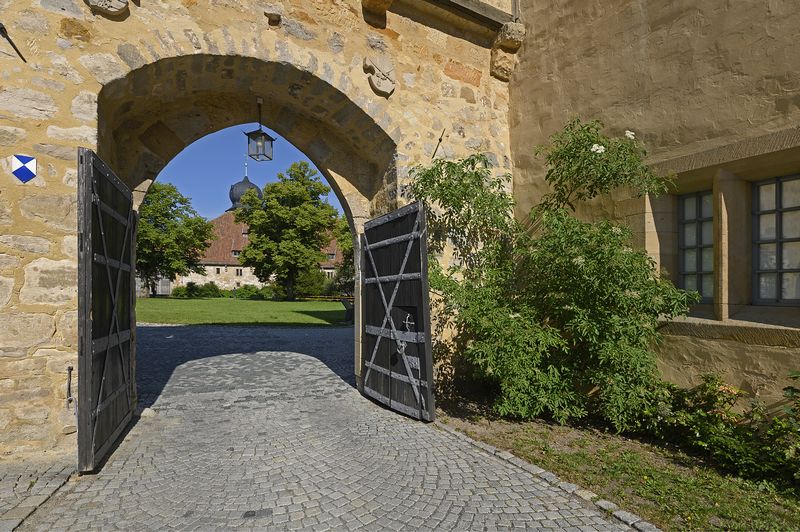 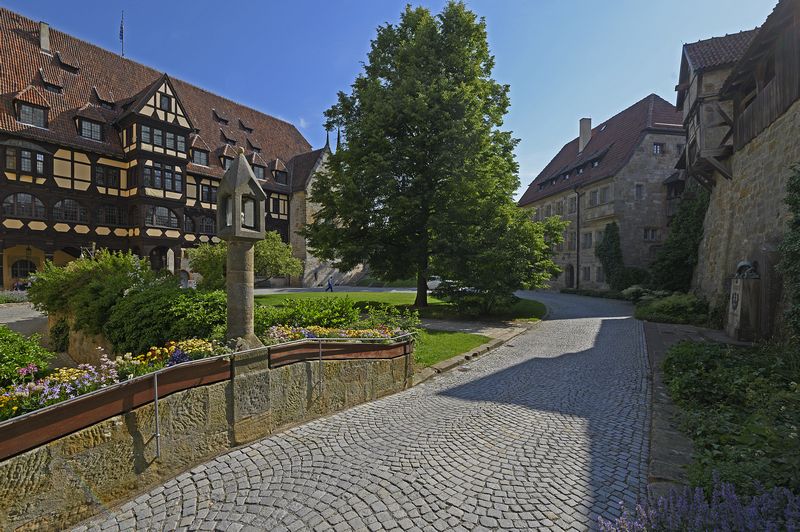 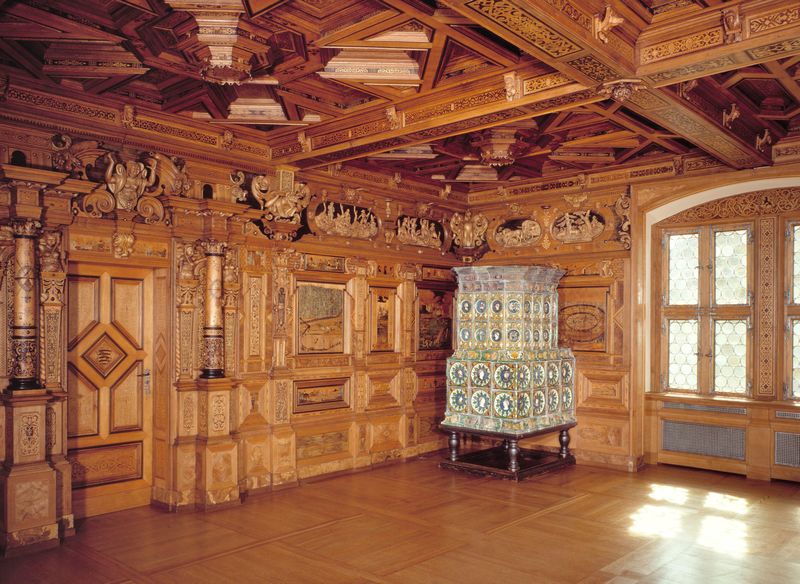 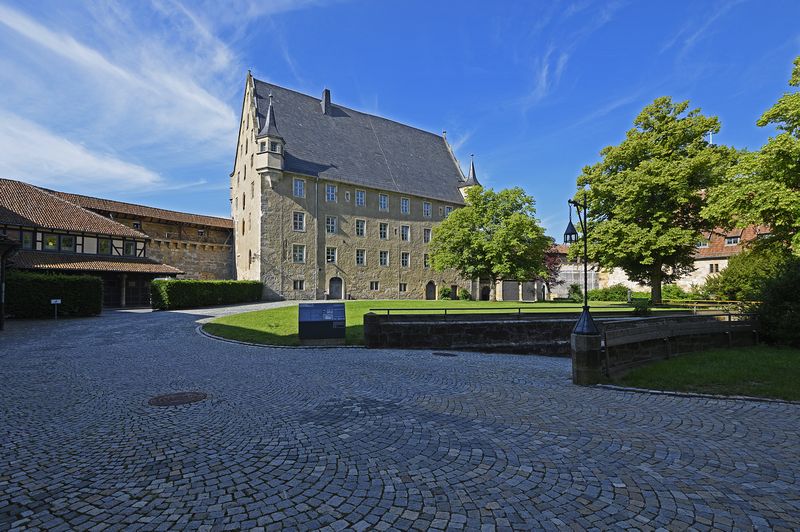 The Veste Coburg is one of the best preserved medieval castles in Germany. Visible from very far away, the "Franconian Crown" dominates the landscape. Today, the castle complex houses the art collections of Veste Coburg, most of which date back to the art holdings of the Coburg dukes.

One famous guest was the reformer Martin Luther, who stayed at the Veste for almost half a year in 1530. The Luther Room commemorates him.

First mentioned in a document in 1056, it passed to the Dukes of Merania in the 12th century, to the Counts of Henneberg in 1248, to the Margraves of Brandenburg in 1291, again to the Counts of Henneberg in 1312, and finally to the House of Wettin in 1353.
In the following 150 years, due to its strategic importance, it was expanded into one of the largest castle complexes in Germany (135 x 260 meters). After the court was moved to the city in the 16th century, the complex was converted into a state fortress. In 1632 the Veste was unsuccessfully besieged by the generalissimo of the imperial army Albrecht von Wallenstein. After the Thirty Years' War, long years of decay followed.

The castle was not remodeled, until 1838 Duke Ernst I, according to plans by the architect von Heideloff, in the spirit of castle romanticism, resulting in a romantic castle setting with turrets, oriels and battlements in 1860. The last reigning Duke Carl Eduard of Saxe-Coburg and Gotha entrusted the castle researcher Bodo Ebhardt with a renewed restoration starting in 1906. 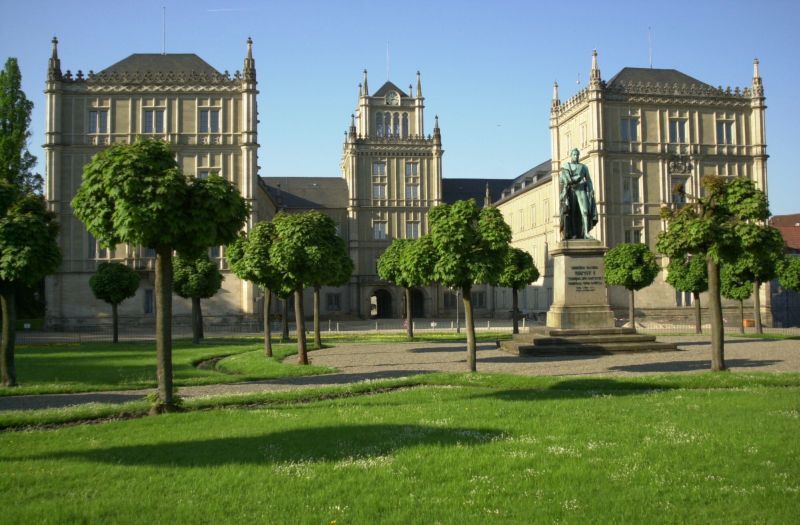 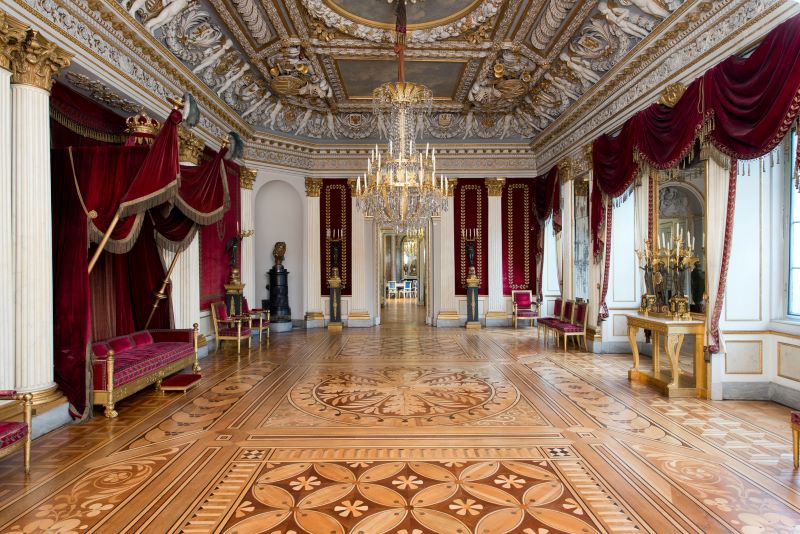 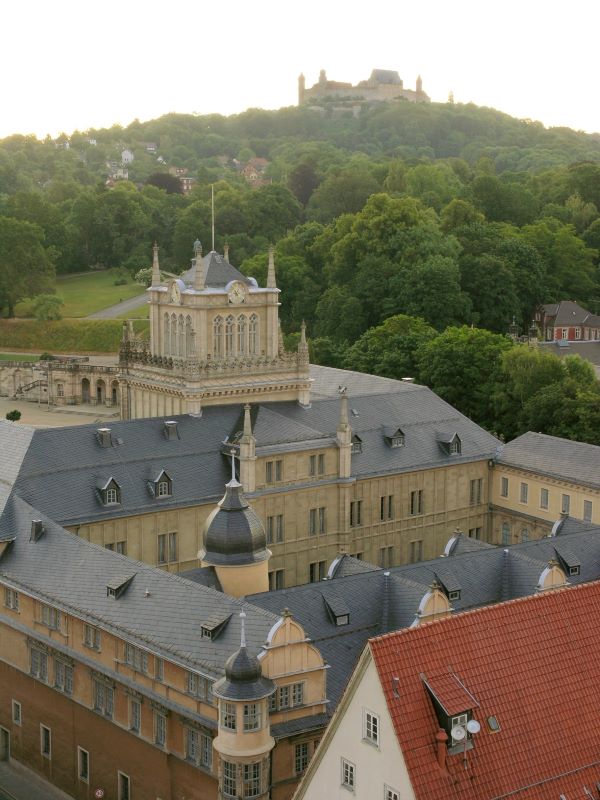 Coburg - View over Ehrenburg Castle to the Veste.

The former city residence of the Coburg Dukes (1547 - 1918) is now mainly a museum and can be visited on guided tours. It is also home to the Coburg State Library with over 400,000 collections. A famous guest was Queen Victoria of England, who often and gladly stayed in Coburg after her marriage to Prince Albert of Saxe-Coburg and Gotha in 1840.

The Castle was built between 1543 and 1547 as a three-winged structure under Duke Johann Ernst of Saxony, who moved his court residence from the Veste to the newly built castle. The complex was not built by labourers, as usually, it was built by paid craftsmen. Which is why Emperor Charles V is said to have given it the name "Ehrenburg" (castle of honour) during a visit in 1547. Between 1623 and 1627 it was extended into a closed quadrangle under Duke Johann Kasimir. The Renaissance complex was largely destroyed in a fire in 1690. Duke Albrecht III then had a Baroque three-wing complex built by 1699, from which time the castle church and the Giants' Hall have been preserved. From 1810, under Duke Ernst I, the Berlin architect Karl Friedrich Schinkel gave the palace its present Neo-Gothic facade.

When Duke Carl Eduard received a settlement of 1.5 million Reichsmarks for his properties from the Free State of Coburg (1918 to 1920) in 1919, Ehrenburg Palace also became the property of the state. The furnishings were given to the Coburg State Foundation. Since 1941, the Bavarian Palaces and Lakes Administration has been in charge of the castle. 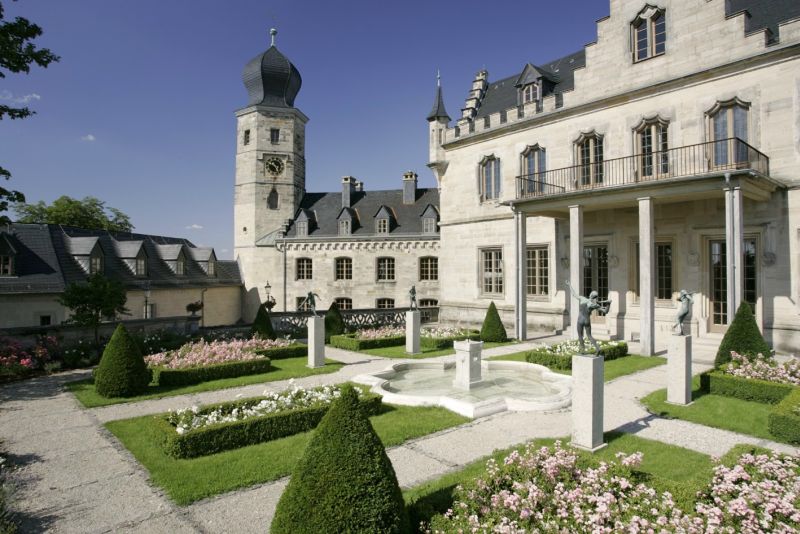 Coburg - Callenberg Palace - summer residence of the dukes of Coburg.

The former summer residence of the Coburg dukes, a jewel of Neo-Gothic architecture, is still in the care of the ducal family of Saxe-Coburg and Gotha. During the 19th century, the family succeeded in rapidly rising to become the most important noble dynasty in the world. Four European royal houses bore her name: Belgium, Portugal, Great Britain and Bulgaria.

Since 1998, Callenberg Castle has housed the Ducal Art Collection SCG with exhibits from four centuries. Guided tours are offered. Various rooms can be rented for celebrations. A castle chapel is also part of the complex. The German Rifle Museum is located in the north-west wing of the castle.

Callenberg was first mentioned in 1122 as the ancestral castle of the knights of "Chalwinberch". The Bishopric of Würzburg in 1231 was followed by the Counts of Henneberg in 1232 and from 1317 by the Lords of Sternberg as owners. In 1592 it fell to Duke Johann Casimir of Saxe-Coburg, who had the medieval castle converted into a hunting lodge. When he died childless in 1633, it passed to the Dukes of Saxe-Meiningen until 1825. In 1826 it was once again given to the Saxe-Coburg line, which still owns it. Duke Ernst I had the upper castle built in 1831. In 1856/57, under his son Ernst II, the lower castle was redesigned in the Neo-Gothic style and given its present appearance. After the death of Ernst II in 1893, Duchess Alexandrine used the palace as her widow's residence and died childless in 1904.

Her great-nephew, Coburg's last ruling Duke Carl Eduard, lived with his family in the castle from 1905 to 1945, and it was modernised in the 1930s. After the Second World War, the castle was occupied by American military and then used by a theatre company, as a home for the elderly and, from 1957, by a women's technical college. In 1972, the ducal family sold the property. In 1982, Andreas Prince of Saxe-Coburg and Gotha, who had returned from the USA with his family, bought it back.