The imperial palace high above the Neckar with the Blue and Red Tower and the Steinhaus make the silhouette of Bad Wimpfen, which is visible from afar, unmistakable. The picturesque old town of Bad Wimpfen is one of the most impressive townscapes in Germany. Bad Wimpfen in the valley, which lies directly on the Neckar, is characterised by the Bad Wimpfen Monastery and the Knights' Monastery Church. Wimpfen is situated on an ancient road of nations, which, coming from France, crossed the Neckar here.... [More about Bad Wimpfen] 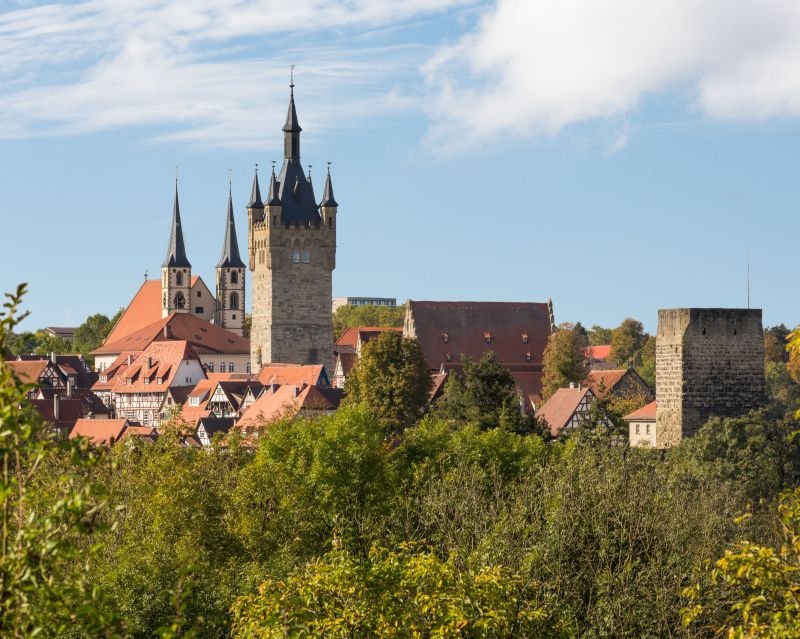 Even from afar Bad Wimpfen amazes with its striking silhouette of the once biggest Imperial Palace north of the Alps. Up until now the keeps "Blue and Red Tower" (Museum of Staufian fortified tower), the Palatinate chapel (Museum of Church History), the arcades of the Staufian great hall and the stone house (Historical Museum) are preserved. The Red Tower is open to the public on weekends and bank holidays.

The Blue Tower, built around 1200, is the city landmark. The tower watchman traditon, probably the oldest in Germany, has continued for centuries up until today.

From 32 meters above one can enjoy a splendid view of the Neckar River valley and the Old Town, which is a listed site, or listen to the tower trumpets on Sundays at 12 am during the season.

In 1182 Emperor Friedrich I. Barbarossa's stay in Wimpfen is first mentioned and this year also sees the start of the history of the Imperial Palace, whose construction temporarily made Wimpfen the centre of "world politics" of the former empire. Both Barbarossa and other Staufer rulers were frequent guests in Wimpfen: respectively three stays of Emperor Friedrich II. and Kaiser Heinrich VI. as well as fifteen stays of King Heinrich (VII.) are represented.

Since the medieval empire did not know a capital and the kings had to move from palatinate to palatinate to dispense justice, Wimpfen was repeatedly Hofstadt- however this was always an economic burden for the population of the town.

After the fall of the Staufer at the end of the 13th century the Imperial Palace became less important. In 1320/22 a fire destroyed it largely.