Neckarsteinach is the southernmost town in Hessen and the southern entrance portal of the European Geo-Nature Park Bergstraße-Odenwald. Its most striking feature are the four medieval castles that rise like a wreath around the bend of the Neckar river. This four-castle ensemble, unique in Germany, the historic old town and, last but not least, the five-kilometre-long car-free promenade along the banks of the river give the town an unmistakable image. There is hardly any other place on the Castle.... [More about Neckarsteinach] 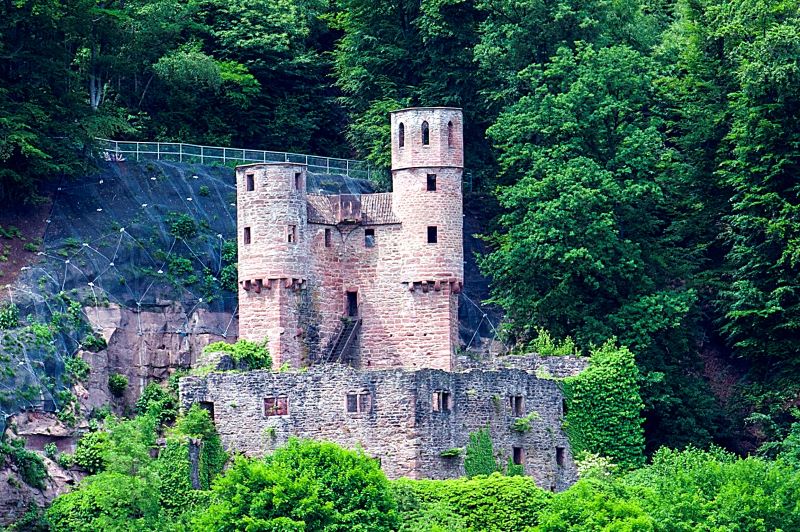 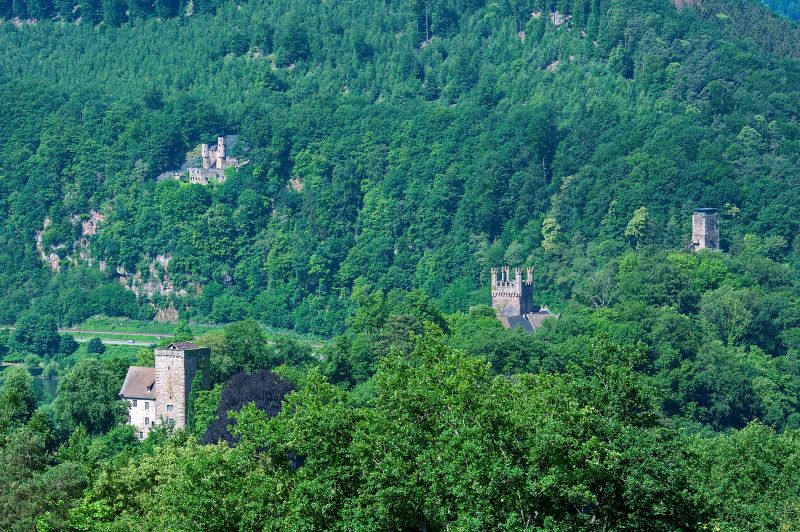 Neckarsteinach - View to the four castles. 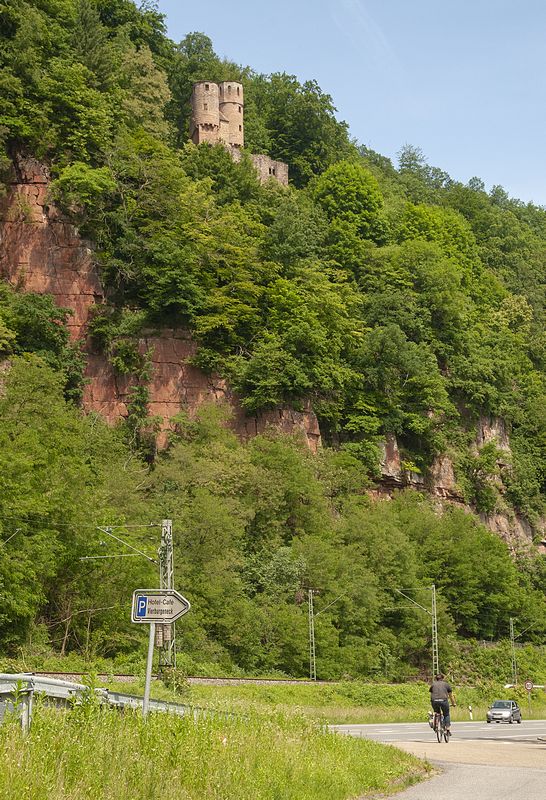 Schadeck Castle is located above the village exit in the direction of Heidelberg and is the landmark of Neckarsteinach. Due to its picturesque location on steep slopes above the Neckar river, the castle is called "swallow's nest".

The castle gate of the Front Castle leads to the courtyard of the former main castle, which offers an open view over the Neckar. The facade of the great hall is almost fully preserved as well as the impressive shield wall, on which a covered wall-walk with two towers runs.

Since 1803 the castle is in possession of the State of Hessen. It can be visited at any time, the shield wall can be climbed.

Castle Schadeck developped as the last of the four Neckarsteinach castles. In 1335 it was sold by Bligger X. and Dieter I. Landschad of Steinach in equal parts to the pins in Worms and Mainz. After changing ownership structures, archbishop Konrad from Mainz pledged the castle to Dieter II. Landschad of Steinach. The castle was in free possession of the family until 1625 and was sold to Wolf Heinrich Metternich zu Burscheid in 1657, who already owned the city, the Front Castle, the Middle Castle and half of the Back Castle as fief. When the Burscheider line of Metternich extinguished in 1753, the pins Speyer and Worms received not only the former feud property, but also castle Schadeck. 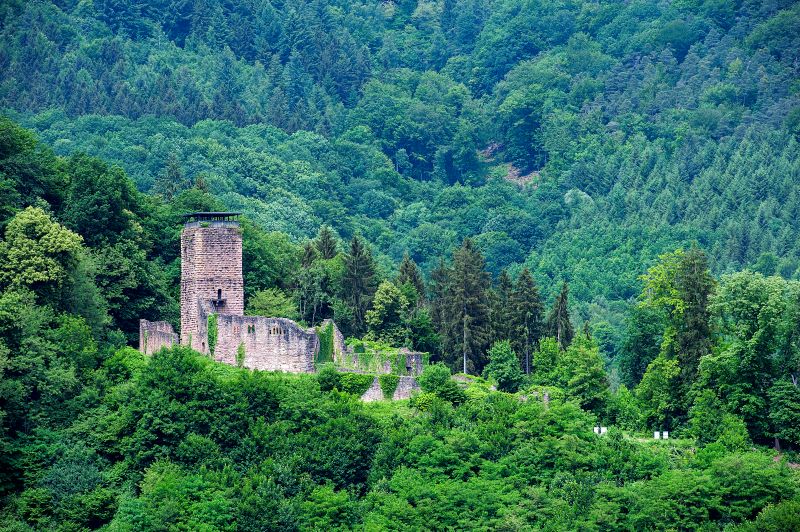 Neckarsteinach - View to the Back Castle. 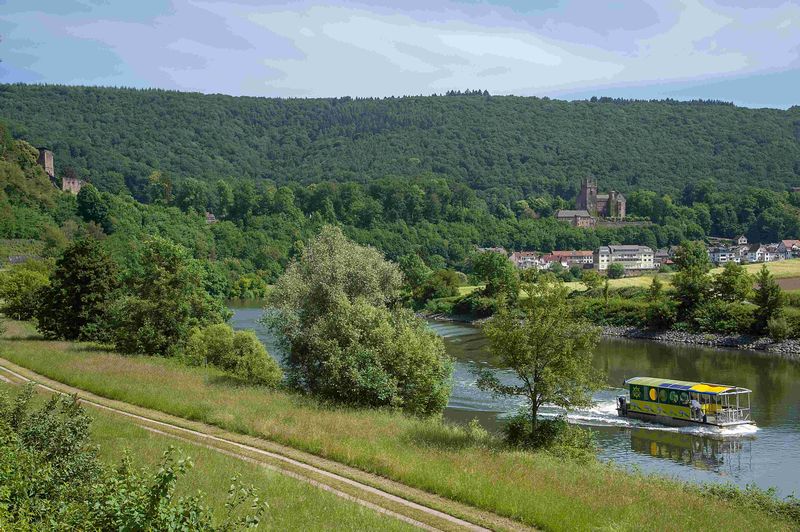 Neckarsteinach - Neckar valley with back castle and middle castle.

The Back Castle is the oldest and most interesting of the four castles in Neckarsteinach. Since its destruction during the Thiry Years War, it is in ruins. Of the former castle only the cellar vault of the great hall as well as an outer wall with Gothic arched windows are preserved. The complex, however, was repaired in such a way that numerous structural details such as beam holes and window struts, elements of a drawbridge and the old pavement of the castle courtyard can be seen. On the basis of the foundation walls plans of buildings and fortifications are visible.

On the massive keep, which has a considerable area of eight by eight meters, a covered observation deck is located in 22 meters height. From here you have a wonderful view over the Neckar Valley, Neckarsteinach and the opposite Dilsberg.

The Back Castle is in possession of the State of Hesse and can be visited at anytime.

The construction of the Back Castle begun around 1100 at a strategically excellent place: The lord of the castle could monitor the Neckar Valley as well as the Steinachtal from here. It is the ancestral seat of the free nobles of Steinach, which they received as a fief of the Bishopric of Worms. Bligger of Steinach is mentioned as the lord of the castle from 1142 to 1165. His son, the minnesinger Bligger II. of Steinach extended the castle to an extensive Staufer castle around 1200. 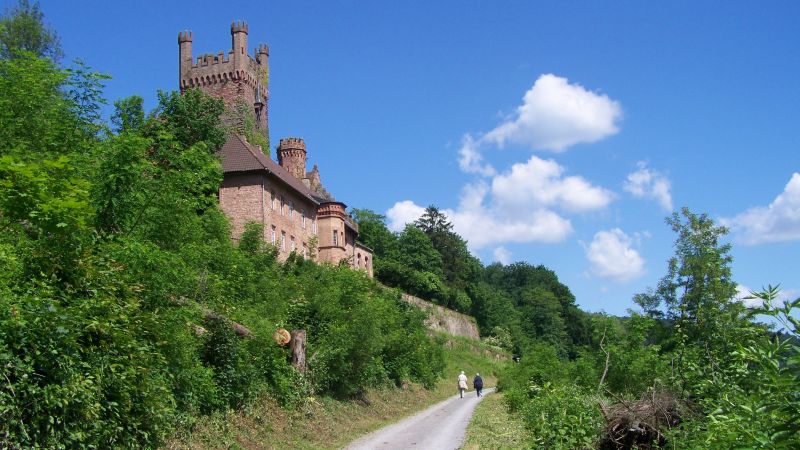 Neckarsteinach - The inhabited Middle Castle by the barons of Warsberg. 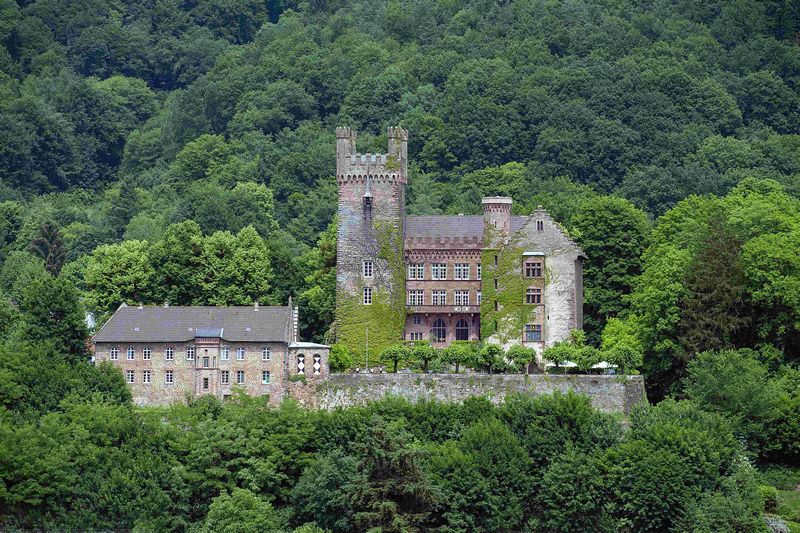 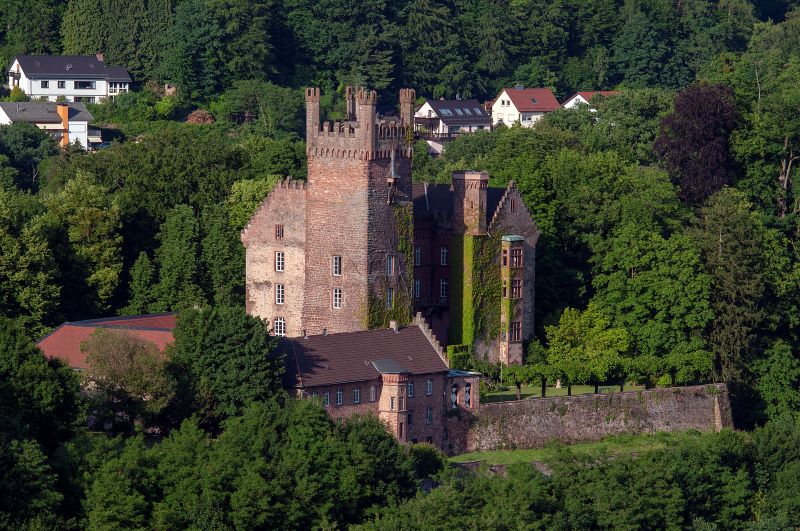 The Middle Castle is located above Neckarsteinach with a view over the Neckar to the opposite Fortress Dilsberg. It is privately owned, has been inhabited since its construction and cannot be visited. Some rooms and the terrace can be rented for special occasions.

Directly in the apex of a curve of the B37 a large car park with a hiking map is located. A hiking trail leads directly to the Middle Castle and the other three Neckarsteinach castles.

The Middle Castle is the second eldest castle of the four castles of Neckarsteinach and was presumably built by Conrad I. of Steinach around 1165. He was the youngest son of the minnesinger Bligger II. of Steiach and, thus, had no stake in the oldest castle, the Back Castle, inherited. Over the centuries there were many changes of ownership, the castle was repeatedly rebuilt and extended, among other things to a renaissance castle around 1550. Its present appearance, which is primarily determined by the neo-gothic style, received the castle around 1835. Since then its silhouette reminds of the rebuilt castles located on the Middle Rhine during the 19th century.

In 1803 the Middle Castle turned to Hessen. The State handed it over to the baron of Dorth, whose descendants still own it today. 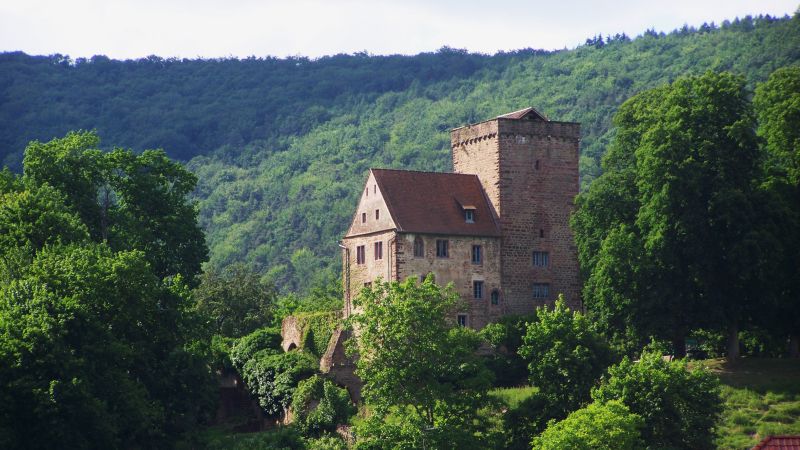 Neckarsteinach - view to the Vorderburg. 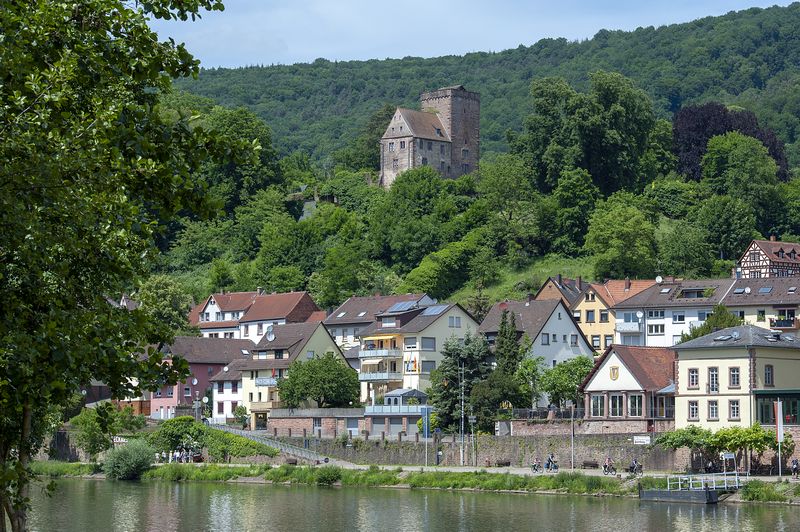 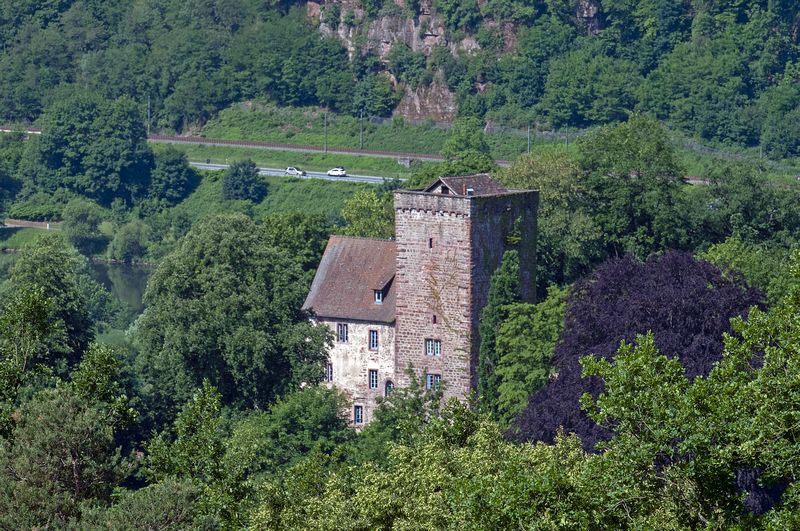 Neckarsteinach - Front Castle from on high. 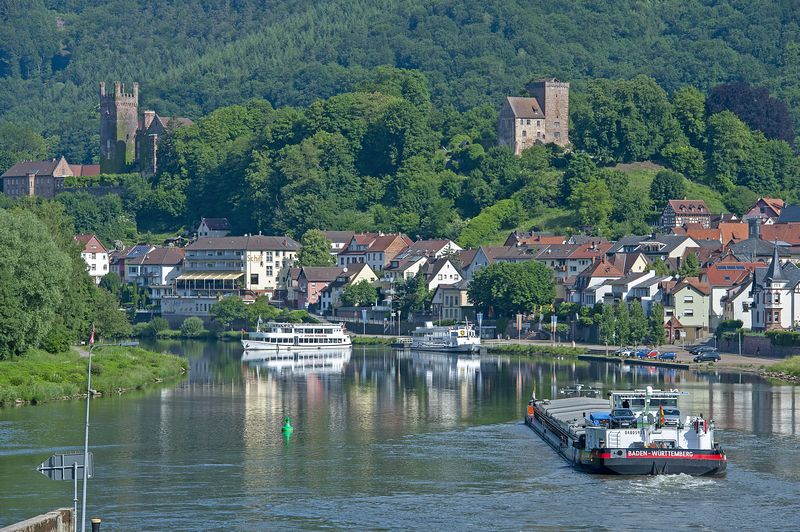 Neckarsteinach - view to the Front Castle and the Middle Castle.

The Front Castle is the third castle that was built in Neckarsteinach. It is located above the Old Town and connected to the city wall. Around the castle there is a beautiful park with exotic trees. The castle complex is privately owned, is inhabited and cannot be visited.

The castle was constructed around 1200 by Ulrich I. of Steinach. His father was the minnesinger Bligger II. of Steinach, from which some scholars suspect that he is the author of the Niebelungenlied. His brother Conrad I. built the Middle Castle.

The Front Castle became the property of the church, half each to the bishoprics of Worms and Speyer. It mainly remained as property of the Lords of Steinach until their extinction in 1653. In the course of the mediatisation in 1803 it came to the state of Hesse, after that it got to various private owners through sale.

During the 18th century the castle complex was reduced to today's remains consisting of the keep and the three storied great hall, largely in their original state.