Heilbronn is located in the heart of Baden-Württemberg and is still strongly influenced by viticulture. It became famous everywhere through Heinrich von Kleist's "Käthchen von Heilbronn". The beautiful location on the Neckar, the wine and a varied gastronomic offer, for example on the "Bummelmeile" along the Old Neckar, make the city a sought-after address not only for castle road guests. Between the first documentary mention as "villa helibrunna" in the year 741 and the destruction of the city.... [More about Heilbronn] 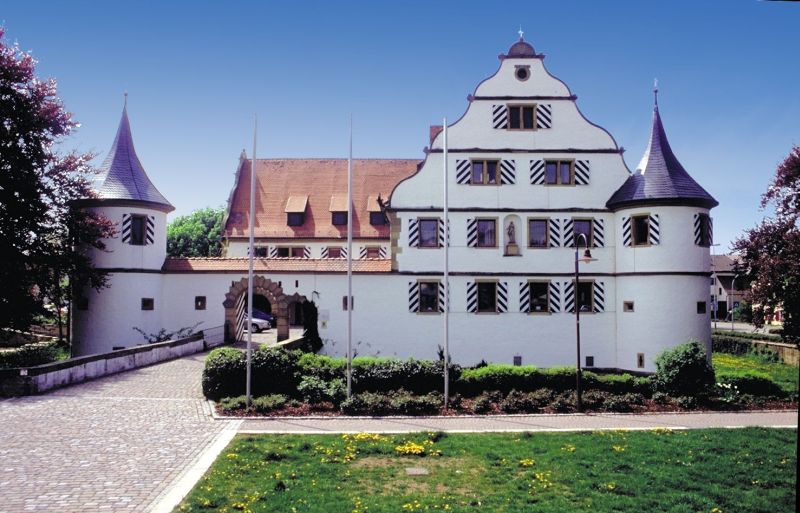 Palace of the Teutonic Order Kirchhausen

In the middle of Heilbronn's district with the same name lies the impressive palace of the Teutonic Order Kirchhausen. The former moated castle was built in Renaissance style by order of Heinrich von Bobenhausen, who was the 41st Grand Master of the Teutonic Order, from 1572 until 1578. At this point, Kirchhausen was independent and location of the Kommende Horneck.

A stony bridge leads across the ditch into the inner courtyard. The loopholes to the left and right of the gate system are decorated with lionheads. The two towers originally were used for defense, later on for straw beds and it served as a detention and sleeping cell for travelling craftsmen. During the last century, the building was used as a school and town hall. Today, the Bürgeramt Kirchhausen is located there.

The palace can be visited during the opening hours of the Bürgeramt. Historical themed tours through the facility can be booked for groups. Click here for further information.