Pfarrweisach was once one of the original parishes and as evidence for this proudly displays St. Kilian on its crest (St. Kilian was an Irish missionary bishop and apostle of Franconia). In 1232 the Bishop of Würzburg sub-divided the oversized diocese; the area was first named thanks to this. The current Catholic parish church was built around 1500. Its gatehouse from 1609 and the high church wall lead to the conclusion that this was once a fortified church. Due to its central location Pfarrweisach.... [More about Pfarrweisach] 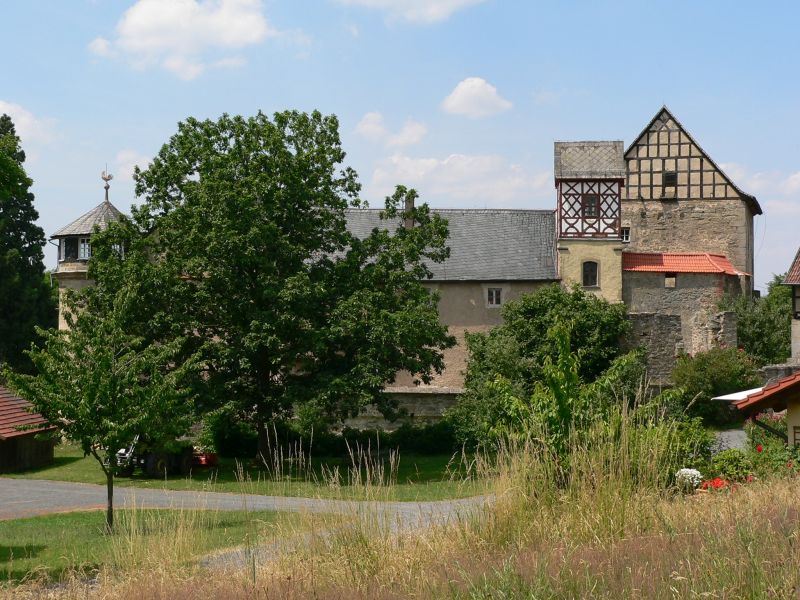 Lichtenstein Castle is located in Lichtenstein, a district of Pfarrweisach, and consists of the North Castle and the South Castle.

Since 1972 the ruins of the North Castle have been in the possession of the district of Haßberge. In the past few years the castle and the castle history have been completely documented and information panels have been installed. On the area below the castle, which was redesigned into a romantic landscaped garden as early as in the 19th century, visitors will find a rock labyrinth with caves and grottos. The South Castle is not open to the public, as it is inhabited.

After the noble lineage of the Lords von Stein had separated into the lines of Stein von Lichtenstein and Stein von Altenstein around 1200, a new family seat was built there. Degen II. von Lichtenstein, a vassal of the Prince-Bishopric of Würzburg, is first mentioned in records in 1215; the castle itself is first mentioned in 1232. From ca. 1345 it was extended into a so-called Ganerbenburg, that is to say it was a fiefdom and residence of several noble families at the same time.
In the Peasants' War in 1525 and in the Second Margraves’ War in 1553 the North Castle was heavily damaged and fell into ruin. The South Castle remained mainly intact and was expanded to its present-day layout during the Renaissance period. In 1565 the entire castle complex was again brought into the sole possession of the Lords of Lichtenstein. When by 1691 this line had died out, the family branch of Lichtenstein zu Lahm inherited the complex. Robert von Lichtenstein zu Lahm, the last one of the lineage, drowned in the river Isar in 1845. Thereafter, the castle passed into the possession of the Counts von Rotenhan. In 1909 the Barons von Rotenhan acquired the South Castle and they still live there today.