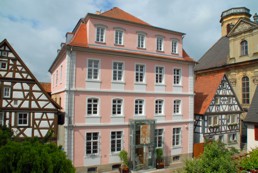 The Old Latin School, a baroque building from 1748, lastly an elementary school, has housed a museum since 1972/73. In 2004 it was reopened after renovation and redesign and received the Museum Prize of the State Government. The museum shows exhibits from foundations of Theodor Sandel and other donors. In the basement there is a department for geology and palaeontology. Special exhibitions take place regularly.