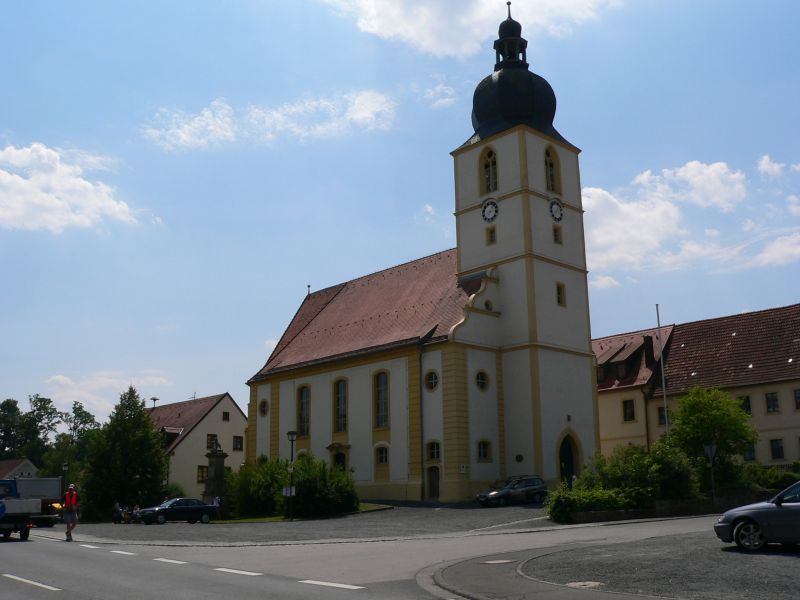 The market-town of Rentweinsdorf lies four kilometres (2.5 miles) south of Ebern in the Baunachgrund on the B 279. Often the name of a place gives clues to the history of its creation and settlement. However, this is particularly difficult for Rentweinsdorf as historians can offer no fewer than three possible meanings.
As an area of settlement Rentweinsdorf appears for the first time as the estate of the Dukes of Meran, who sold it in around 1200 to the Counts of Truhendigen. In their day the small town already possessed market rights, as shown in a Rescript of 1698 from Emperor Leopold I and through a re-issue of 1790. As early as 1231 the area was recorded as being in the possession of the imperial Baunach cantonal house of Rotenhan, whose Rentweinsdorf descendants still live in the palace and its extensive estate to this day.
The palace, with its open and inviting West-wing, overlooks the large square of Rentweinsdorf and is framed by the rectory, the town hall, the inn and the market hall. In 1533 the Lords Hans and Mathäus von Rotenhan brought the Reformation to Rentweinsdorf and elevated it for good to an independent parish.
From 1597 to 1600 the protestant Church of the Holy Trinity, with its many Baroque features, was built in the middle of town. Town hall address: Rentweinsdorf market, Planplatz 3, 96184 Rentweinsdorf, Germany.